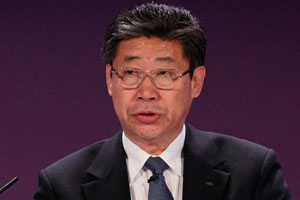 Kuala Lumpur – Malaysia, Oct 17, 2012: AFC Acting President Zhang Jilong has rejected the accusations leveled in a recent letter from suspended official Mr Mohamed Bin Hammam through his lawyer Eugene Gulland, while denouncing “their plan to intimidate and create technical legal issues and objections in the hope that the more serious allegations of secret commissions, bribery, corruption and other wrong-doings are never exposed to the light of day”.

In response to the letter dated 8 October 2012, Jilong has written to AFC’s Member Associations, the AFC Executive Committee and FIFA and rejected the allegation that he had a “conflict of interest in the ongoing AFC Disciplinary Committee action against Bin Hammam” or that “he personally benefited from his support”.

Further, Jilong added that at no stage had he interfered with the ongoing disciplinary action against Mr Bin Hammam, who was “being dealt with as provided for under the AFC Statutes and the AFC Disciplinary Code”.

“The accusations in Mr. Gulland’s letter are total fabrications designed to tear apart the Asian Football Confederation, divide this family and paralyse our institution. Mr. Gulland’s allegations are aimed at confusing and delaying the Disciplinary Action against his client,” Jilong said.

“Mr. Bin Hammam and Mr. Gulland do not want the Asian Football Confederation to consider the evidence that now exists and for which Mr. Bin Hammam must answer.

“Their plan is intimidate and create technical legal issues and objections in the hope that the more serious allegations of secret commissions, bribery, corruption and other wrong-doings are never exposed to the light of day. They seem willing to use any means to accomplish their goal. It is my belief that Mr. Gulland has lost sight of the boundaries of permissible professional conduct as a lawyer.

“Accordingly, AFC is investigating whether there are sufficient legal grounds to file an ethics violation against Mr. Gulland to stop improper legal defence tactics intended only to interfere with the independent functions of the AFC Judicial Bodies.”

Jilong pointed out that Mr Bin Hammam continues to communicate with AFC’s Member Associations as an ‘AFC Official’.

“As an example of this unwarranted interference, I would like to ask that we all stop for one moment and recognize that Mr. Bin Hammam’s communication to you as an AFC Official certainly is a violation of FIFA’s provisional ban against Mr. Bin Hammam.

“We have referred his actions to FIFA. The provisional FIFA ban which is still valid and has not been lifted was enacted or put in place to prevent Mr. Bin Hammam from participating in association football activities which includes sending letters to the AFC Disciplinary and Appeal Committees.”

Jilong called on the Member Associations to stay firm in the face of these diversionary tactics.

“And we have a simple choice to make in the face of the distractions being thrown in our direction. We can decide to roll up ourselves and do the work such as amending our controlling statutes to put in place comprehensive by-laws and regulations which actually create a system of governance that leads to transparency and accountability.

“Or, we can ignore the truth and go back to business like it was before while pretending that it is acceptable for one man to assume control of this Football Confederation and run it like it was his own private business.”

Jilong said he would ensure that the judicial process reached its logical end.

“I believe I understand and know the direction we must take to get where we want to be – and I believe right now we must stay the course and see the legal process that has been started through to its end.

“I never asked to become the Acting President or to take on these incredibly difficult problems and responsibilities. But I will not run away from this work either and I ask for your help and support.

“The immediate task I believe is that we must all agree to allow our independent Judicial Bodies to hear the evidence and decide the case against Mr. Bin Hammam. We can then take the next steps in our journey of re-building the Asian Football Confederation.” —- AFC