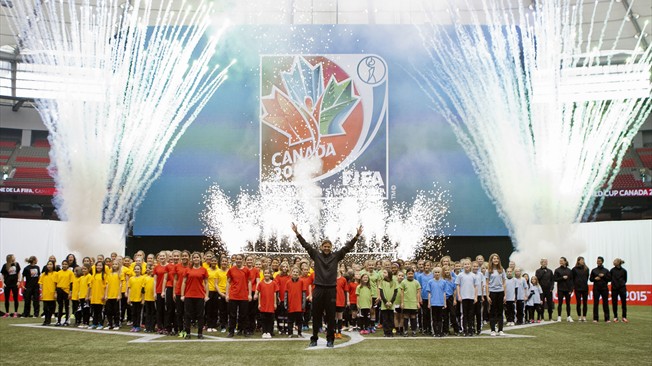 Vancouver – Canada: The Official Emblem for the FIFA Women’s World Cup Canada 2015™ was unveiled across Canada and around the world via a live event in Vancouver on Friday, 14 December 2012. The event, hosted by the Canadian Soccer Association, was broadcast on national television by FIFA Media Rights Licensee TSN, with corresponding live events unveiling Host City composite emblems in five more cities that spread from coast to coast across Canada.

Just like the event itself, the Official Emblem reflects the core concept of ‘coast to coast’ that will embody the FIFA Women’s World Cup in less than three years’ time. To help unveil the emblem, Canada’s national team was on hand in Vancouver, including national head coach John Herdman and captain Christine Sinclair.

Earlier this year, Canada announced the six Official Host Cities for the FIFA Women’s World Cup Canada 2015: from coast to coast, Vancouver, Edmonton, Winnipeg, Ottawa, Montreal and Moncton. This competition marks the first time that a single-sport tournament has been hosted across Canada, from Vancouver near the Pacific Ocean to Moncton near the Atlantic Ocean.

“Today’s emblem launch marks a milestone leading up to a monumental event for Canada, when we host the FIFA Women’s World Cup Canada 2015,” said the Honourable Bal Gosal, Minister of State (Sport). “As a huge soccer fan, I couldn’t be more proud of our Government’s support for this prestigious event, which will bring world-class soccer to six cities across our great nation.”

“The emblem of a competition is an important step on the road to the first game,” said FIFA President Joseph S. Blatter in a recorded message for the event. “It symbolises and conveys the values of a country. One could say that it represents the beat of the host country’s heart with all its history and emotions. Organising the FIFA Women’s World Cup with 24 teams for the first time in 2015 will give a greater international dimension to this competition. I am also convinced that, with its diversity, the Canadian population will be a great support to all the teams and will add, once again, a special atmosphere to the tournament.”

“From coast to coast – a mari usque ad mare – the FIFA Women’s World Cup Canada 2015 will showcase the best women footballers from around the world,” said Peter Montopoli, Chief Executive Officer of the Local Organising Committee (LOC) for Canada 2015. “We are proud to unveil the Canada 2015 Official Emblem and official look that will help us welcome the world and its game to our great nation in 2015.”

Earlier this week, in a ceremonial gesture to symbolise the transition from one FIFA Women’s World Cup host to the next, young Canadian soccer player Sofia Graziani from Moncton travelled to Frankfurt, Germany to collect a soccer ball from Steffi Jones, President of the Germany 2011 Local Organising Committee, at the offices of the German Football Association. In 2011, the sixth edition of the quadrennial FIFA Women’s World Cup was hosted by Germany; in 2015, the seventh edition will be hosted by Canada.

Along with the Official Emblem, the Canadian Soccer Association also unveiled the tournament’s official look, which extends the “coast to coast” concept by showing Canada as a multifaceted and multidimensional host country. The design of both the Official Emblem and the official look features an abstract interpretation of characteristic elements of Canadian nature, such as local fauna and flora, the sky, the mountains and the cityscape, aiming to portray Canada as an ambitious, modern and passionate host country. —- FIFA/Photo © LOC