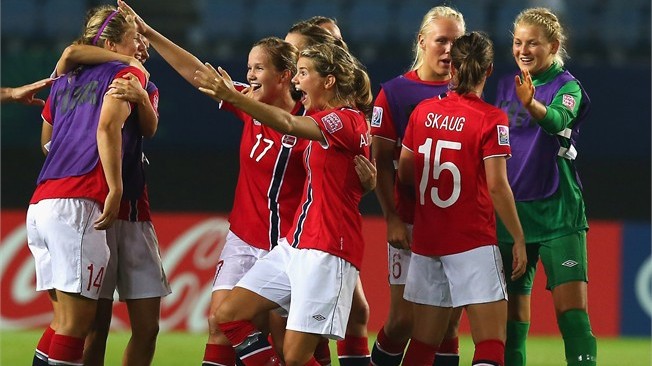 Japan – August 27, 2012: The day began with six teams hunting three remaining quarter-final berths across the two groups, with Korea DPR, Norway and USA collecting their tickets to the last eight. However, arguably the biggest story came as the only confirmed team of those on show today, Germany, stunned two-times champions USA with a 3-0 winning scoreline. Nevertheless, the Stars and Stripes still advanced with a vastly superior goal difference to China PR.

In Group C, Canada threatened a boil over victory against Korea DPR, only for the resilient Asians to bounce back and secure top spot with a perfect record. Meanwhile, Norway cruised to a 4-1 win against Argentina to claim the remaining ticket on offer.

Goal of the day

Almost certainly needing a win over Korea DPR to stay alive in the competition, Canada made the perfect start through Christine Exeter. The University of Louisville forward entered the penalty area just as she received a pass from Adriana Leon and, while heading towards goal, neatly pirouetted and held off her attacker all in one movement, before stabbing the ball home.

Only one big gun fires

Germany’s remarkable one-sided victory over fellow two-time champions USA came with, perhaps unsurprisingly, an avalanche of statistics. The two are without a doubt the elite nations of the FIFA U-20 Women’s World Cup, having won four of the five tournaments between them. The pair were playing out their fifth meeting, extending a record of most matches between two nations in the history of the tournament. Having only lost two previous matches across all five previous editions, it was no surprise that the result was USA’s worst ever defeat. That occasion was also against Germany, 3-1 in 2004. The win was also Germany’s tenth on the trot and equals the existing record currently held by, none other than, USA.

Once again a significant number of Korea DPR supporters were on hand to cheer on their side for the third match in a row. This time Saitama was the venue as Korea DPR overcame conceding an early goal to triumph 2-1 over Canada. A number of supporters bore T-Shirts calling for a return to the ‘Spirit of ‘66’, a reference to the nation’s ground-breaking march to the quarter-finals at the 1966 FIFA World Cup™.

Good things come to those that wait

It nearly didn’t happen but finally Argentina scored eight minutes from the end of their third group match. Yael Oviedo swept a loose ball home from close range following a goalkeeping error to bring some joy to the players and supporters. On the debit side, the injury-time goal they conceded took their tally to 19, beating Thailand’s record tally of 18 set on home soil in 2004.

7 – Kim Un Hwa extended her lead at the top of the goalscorers tally by hitting home her seventh of the tournament, having scored five in her previous outing against Argentina. Hwa’s personal haul is higher than the goal tally achieved by nine of the competing nations.

“Being in Miyagi was really emotional for us. Of course we watched the disaster on TV and it touched us. It is a privilege to be here and to play football here. Football is not the most important thing in the world. To play here is a tribute to the people here in Miyagi.” Norway coach Jarl Torkse