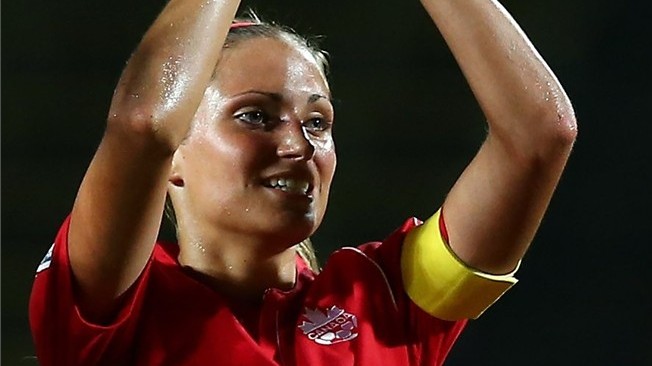 Japan, August, 25, 2012: Glancing up at the scoreboard at the end of her team’s opening match with Argentina at the FIFA U-20 Women’s World Cup Japan 2012, Canadian captain Shelina Zadorsky is likely to have considered the result as a job well done.

The resounding 6-0 victory, which included a penalty from Zadorsky to open the scoring, was regarded by most observers as a fair reflection of Canada’s total domination of the game.

But a peek at the North Americans’ final Group C fixture does not make for such enjoyable viewing, as their upcoming opponents on Monday are none other than Korea DPR, whose players have netted a remarkable 13 goals in two matches, nine of which came against the luckless Argentinians. A defeat for the young Canucks at the hands of the impressive North Koreans could well signal the end of their Japanese adventure.

Sandwiched between these two encounters, Canada had the opportunity to wrap up a quarter-final spot, but instead they went down 2-1 to Norway, despite having opened the scoring.

“It’s really important to pick ourselves up and not feel too discouraged by the defeat,” Zadorsky told FIFA.com. “It’s not over for us yet. We have to put our last match behind us. We can’t do anything about it, but we need to use it as a learning experience,” she added.

One of the plus points in the defeat by the Norwegians, who needed to win to avoid elimination, was the unity on display during the match. “We could feel that things were starting to go against us, and that we were being put under more and more pressure,” said the Canadian No6, referring to the way in which Andrew Olivieri’s charges appeared to run out of steam in the second half, in spite of their 1-0 lead.

“But I could still hear my team-mates constantly talking to each other, supporting each other and staying positive. We lost the game, sure, but I’m still proud of the team spirit we showed. That’s something we can build on as we go forward to the next challenge,” she continued.

The challenge in question involves taking on a Korea DPR side whose attacking prowess would give any defence in the world a few sleepless nights. As a centre-back, Zadorsky is no exception, but she is keen to make the distinction between concern and fear.

“I’m not afraid, but I’m aware of the size of the task,” admitted the University of Michigan player. “I’m ready for it. Our back four will need to be at their very best. But I’m pretty confident that we’ll be able to improve on our first two performances.”

Although her motivation is already at its peak, Zadorsky does not have to look far for inspiration as the decisive clash approaches. “I really admire Carmelina Moscato and Lauren Sesselman, who were absolutely fantastic during the Olympics,” she said, her admiration for Canada’s bronze-winning defensive partnership clear in her voice.

“They’re a great example to follow, and with Rachel Melhado, my partner in central defence, we’re trying to reproduce their success,” explained the U-20 skipper.

The historic third place secured by the senior side at London 2012 was a huge boost to women’s football in Canada, the level of which is continually improving, according to Zadorsky. “It’s amazing to see the progress that the national team has made over the last few months,” said the defender.

”But it’s not something that’s just happened overnight – it’s the result of years of work, which began with our youth teams. Being a member of the U-20 squad today means that you’ll have a role to play in the senior side tomorrow. And that all starts now. More specifically, it starts with our next match,” said Zadorsky.

Ahead of that crucial encounter, the 19-year-old centre-half is sure of one thing: her pre-match motivational speech will be the easiest she has performed in her role as team captain. “Honestly, there’ll be very few words involved. It’s a case of win or bust,” she said. —- FIFA/Image © Getty Images