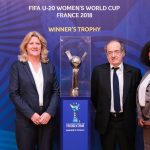 The youth competition will take place in the Brittany region of France from 5 to 24 August 2018, and its Official Emblem reflects the strong history and values of the Breton culture. It features a triskele motif, echoing the area’s Celtic past, and black-and-white stripes, representing the Breton flag.

The body of the trophy is a lighthouse, a common sight across the coast of Brittany, evoking the theme of light, an element central to the tournament as illustrated by its Official Slogan, #DareToShine.Speaking at the Official Emblem launch, FIFA Secretary General Fatma Samoura said:

“Brittany is one of France’s strongest regions for women’s football, and I am certain that as host of the FIFA U-20 Women’s World Cup it will inspire young footballers to showcase their skills and overcome their limits.

Women’s football is well established in France but of course our efforts to bring more young players into the game are never finished. This youth tournament is the perfect platform to reinforce this message and continue developing the women’s game.”

“For the very first time, our country will have the privilege of hosting a major youth international tournament, which will bring together the 16 best U-20 women’s teams in the world, including France. There will be 32 matches in the four host cities of Concarneau, Dinan/Léhon, Saint-Malo and Vannes.

Brittany, a region passionate about football, is already enthusiastically preparing. We are all looking forward to the start of the competition, which will be vital both in terms of discovering new talent and for the women’s game itself ahead of the FIFA Women’s World Cup in 2019.”

Camille Abily, the former French international and current Olympique Lyonnais midfielder, is together with Eugénie Le Sommer and Griedge Mbock one of the three ambassadors of the FIFA U-20 Women’s World Cup France 2018. She too is delighted that the tournament is being hosted in France.

“I am very proud and honoured to be one of the ambassadors of the tournament. I had the privilege of taking part in the very first edition in Canada in 2002. It was my first World Cup and I have some fantastic memories of it. As a player, you obviously have to make the most of these magical moments.

I am a Frenchwoman as well as a Breton so I am extremely happy to see this competition take place on our soil. Brittany is recognised as a hotbed of football and I am sure that its people will turn out in numbers, as will all lovers of women’s football. They will be there to support you and cheer you on. I can’t wait to be there and wish you all a great competition.”

The four official host cities for the FIFA U-20 Women’s World Cup France are located in the region of Brittany: