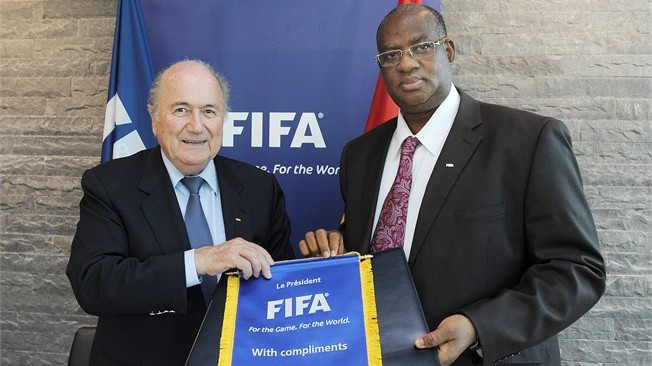 Zurich – Switzerland, Sept 26, 2012: The figures speak for themselves. Thirteen years after its launch by FIFA President Joseph S. Blatter, the Goal Programme has reached a new milestone.

According to the latest figures released on Tuesday 25 September, by the FIFA Development Committee chaired by FIFA Vice-President and CAF President Issa Hayatou (Cameroon), so far a total of 600 Goal projects in 199 member associations have been implemented, representing a total investment of USD 250 million by FIFA.

Throughout the years, the Goal Programme has highlighted the principle of solidarity, with Africa as the main beneficiary of funds (166 projects allocated to the region’s member associations) followed by Asia (147), Europe (111), North, Central America and the Caribbean (99), Oceania (42) and South America (35).

“More important than the figures is the fact that the Goal Programme and all other FIFA development programmes are having a concrete and positive impact on local communities, thus enabling FIFA to fulfil its mission: develop the game, touch the world and build a better future,” said FIFA President Joseph S. Blatter.

More important than the figures is the fact that theGoal Programme and all other FIFA development programmes are having a concrete and positive impact on local communities.

Goal funds have mainly been used to create football infrastructure, including technical centres (35 per cent of the overall investment), headquarters (25 per cent), football pitches (24 per cent) and football academies (4 per cent). Further investments have been made in IT applications (3 per cent) and miscellaneous items such as medical centres and futsal halls (9 per cent).

South Sudan, FIFA’s 209th and newest member association, is set to become one of the latest recipients of Goal funds with a USD 500,000 project aimed at building the headquarters of the South Sudan Football Association and a playing surface in Juba approved by FIFA’s Development Committee on Tuesday. This grant will be supplemented by an additional award of USD 500,000 through the programmes for less-privileged member associations, laying solid foundations for the new organisation.

The FIFA Development Committee confirmed its intention to support recent changes in the strategic orientation of the programme, which will diversify initiatives to cover a wider spectrum of requirements.

Additionally, the Committee agreed on the importance of creating synergies with other FIFA development schemes, including FIFA’s PERFORMANCE Programme which supports the member associations in their management challenges, as well as a variety of key areas, such as the worldwide football stakeholder registration programme, income generation activities, initiatives aimed at less-privileged associations, as well as technical and education schemes. —- FIFA/Image © Foto-net