Aug 28, 2016: The pathway to global glory has become clearer after the match schedule for the FIFA Club World Cup Japan 2016 presented by Alibaba E-Auto was announced. 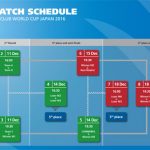 The tournament, which will be played between 8-18 December, features the six continental club champions and a representative of the host nation.

The tournament will take place at the Suita City Football Stadium in Osaka and the International Stadium Yokohama, with the latter to host the final having also previously been the venue for the deciding match of the 2002 FIFA World Cup Korea/Japan between Brazil and Germany.

2014 FIFA Club World Cup champions Real Madrid were the most recent club to book their ticket to Japan when they won the UEFA Champions League in May, with South America’s representative to be determined when the Copa Libertadores final is played later this month.

The two other confirmed participants are Club America (CONCACAF) and Auckland City FC (OFC) who both won their respective continental championships in April.

Further information on the tournament can be found on FIFA.com including a Japanese language version. —- FIFA