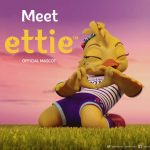 ettie is a young chicken with a passion for life and football. She comes from a long line of feathered mascots and is the daughter of Footix, the Official Mascot from the 1998 FIFA World Cup France™.

Her strong family connection to the Gallic rooster, who is still a popular national French symbol, makes her a fitting choice as the Official Mascot for the FIFA Women’s World Cup France 2019.

ettie’s name comes from the French word for star, étoile, as she came from the bright star that her father Footix was awarded for the 1998 FIFA World Cup.

Footix cast his star far into the night sky so it could shine brightly, and after a few years of travelling through the cosmos it came back to him in the form of his twinkling daughter, ettie.

Footix knew immediately that ettie was very special, not only because of her sparkling personality that would radiate happiness and joy to everyone she met, but because they shared a real passion for football.

After many years of playing football together, Footix realised that ettie was a dazzlingly talented and fearless player and was the absolute encapsulation of the slogan of the FIFA Women’s World Cup France 2019 – DARE TO SHINETM (ettie Official Mascot).

ettie is gregarious and social. She can sometimes be cheeky but is cute and will bring a sense of fun and warmth to the competition as the friendly face of the FIFA Women’s World Cup France 2019.

She wears a chic marinière-inspired football jersey, her modern twist on a French classic that echoes the national flag.

Her enthusiasm for women’s football is contagious and she hopes to radiate her sense of fair play and passion for the game around the world and to inspire national pride in France as the host country for the competition.

Her personality shines as brightly as her passion for women’s football and we are happy that she is the young voice of the tournament. She represents hope, passion for football and of course fun.

ettie always Dares to Shine and we believe that she will bring joy and laughter to fans with her playful and charming behaviour and her sparkling personality, as well as inspiring a new generation of young girls and women to get involved in football.”

The FIFA Women’s World Cup will set the stage for the world’s best players to compete in world-class venues across France in Grenoble, Le Havre, Lyon, Montpellier, Nice, Paris, Reims, Rennes and Valenciennes. The competition will take place from 7 June to 7 July 2019 (ettie Official Mascot). —- FIFA