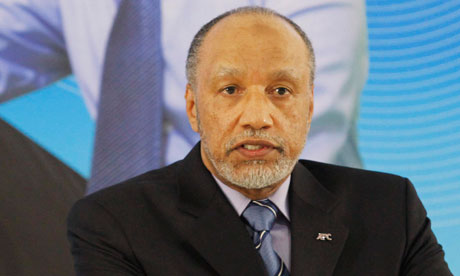 Lausanne, July 19, 2012 – The Court of Arbitration for Sport (CAS) has rendered its decision in the procedure involving Mr Mohamed Bin Hammam (Qatar) and FIFA. The CAS has upheld Mr Bin Hammam’s appeal, annulled the decision rendered by the FIFA Appeal Committee and lifted the life ban imposed on Mr Bin Hammam.

During his campaign for the FIFA presidential election, Mr Bin Hammam attended a meeting of the Caribbean Football Union (“CFU”) in Trinidad and Tobago on 10 and 11 May 2011. On 10 May 2011, he made a speech about his candidacy. Following the speech and Mr Bin Hammam’s departure from the conference room, Mr Jack Warner, who was at the time a member of the FIFA Executive Committee, announced that there were “gifts” for representatives of the attending associations. In the afternoon of 10 May 2011, the CFU General Secretary collected from Mr Warner’s office a locked suitcase, containing a number of unmarked envelopes, each containing USD 40’000, which were distributed to the CFU delegates on the same day.

On 9 November 2011, Mr Bin Hammam appealed the decision to the CAS. Following the closure of the written pleadings, a hearing took place in Lausanne from 18 to 19 April 2012, in the presence of the parties, their representatives and witnesses. Mr Sepp Blatter testified at the hearing by video-conference, while Mr Warner and Mr Blazer declined to appear. Mr Bin Hammam chose not to attend the hearing.

The CAS Panel, composed of Mr José Maria Alonso, Spain (President), Mr Philippe Sands QC, United Kingdom, and Mr Romano Subiotto QC, Belgium/United Kingdom, after thorough deliberations and on the basis of the evidence before it, was unable to conclude to its comfortable satisfaction that the charges against Mr. Bin Hammam were established.

The CAS Panel has established that:

– Mr. Bin Hammam invited Mr Warner to convene a special meeting of CFU members, with the purpose of offering Mr Bin Hammam an opportunity to make a presentation to the CFU delegates in view of the forthcoming election to the FIFA Presidency.

– Mr Warner arranged for each of the members present to be offered a personal gift of USD 40,000 and said that the gift was from the CFU. The following morning, at an urgent meeting, Mr Warner changed his story, telling those present that the gift was from Mr Bin Hammam However, the CAS Panel has not been presented with any direct evidence to link Mr Bin Hammam with the money’s physical presence in Trinidad and Tobago, its transfer in a suitcase or otherwise to Mr Warner, and its subsequent offer to the CFU members for the purpose of inducing them to vote for Mr Bin Hammam.

In particular, the Panel emphasized that “no efforts were made to trace the source of [the] banknotes that were photographed, and recognises that it is possible to infer that the failure of Mr. Bin Hammam to carry out that relatively simple exercise in the course of these proceedings might be explained by the fact that it would have confirmed that he was the source”.

The CAS Panel stated that “this conclusion should not be taken to diminish the significance of its finding that it is more likely than not that Mr. Bin Hammam was the source of the monies that were brought into Trinidad and Tobago and eventually distributed at the meeting by Mr Warner, and that in this way, his conduct, in collaboration with and most likely induced by Mr Warner, may not have complied with the highest ethical standards that should govern the world of football and other sports.

This is all the more so at the elevated levels of football governance at which individuals such as Mr. Bin Hammam and Mr. Warner have operated in the past. The Panel therefore wishes to make clear that in applying the law, as it is required to do under the

CAS Code, it is not making any sort of affirmative finding of innocence in relation to Mr Bin Hammam. The Panel is doing no more than concluding that the evidence is insufficient in that it does not permit the majority of the Panel to reach the standard of comfortable satisfaction in relation to the matters on which the Appellant was charged. It is a situation of “case not proven”, coupled with concern on the part of the Panel that the FIFA investigation was not complete or comprehensive enough to fill the gaps in the record.”

In its conclusion, the Panel noted that FIFA was in the process of reforming its Ethics

Committee and that, in the event new evidence relating to the present case was discovered, it would be possible to re-open the case, in order to complete the factual background and to establish if Mr Bin Hammam has committed any violation of the FIFA Code of Ethics.

The CAS Panel reached its decision by a majority of 2-1. —– CAS