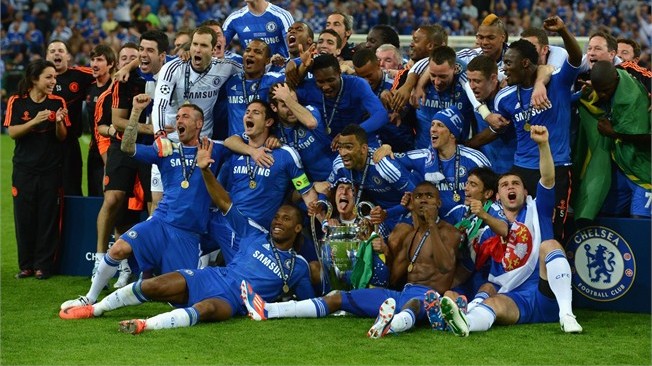 Trailing to Thomas Muller’s late header, Drogba first saved the Blues by heading them level in the 88th minute. Then, after Arjen Robben has missed from the spot in extra time, Drogba kept his nerve after Ivica Olic and Bastian Schweinsteiger had failed in the shoot-out to ensure Chelsea erased the memory of their misery in 2008 by conquering Europe for the first time.

“They never give up until the end,” Drogba told ITV. “This team is amazing. It was written, I think, a long time ago. I want to dedicate this cup to all the managers we’ve had before, all the players I’ve played with before.”

Drogba also hailed the performance of goalkeeper Petr Cech, who saved a penalty from Arjen Robben in extra time and also played a key part as Bayern missed twice in the shoot-out. “When we have this guy in goal you have to believe,” Drogba said.

Surely the triumph will be enough to secure Roberto Di Matteo the full-time job as Chelsea manager. After all, following so many failures, Di Matteo has delivered the trophy Abramovich has been eyeing for nine years.

From his place in the stands, the Russian was clearly overjoyed, as was the suspended John Terry, who watched the tense shoot-out unfold from the touchline, on roughly the same spot he had prowled three hours earlier. It was the most visual example of the damage Chelsea did to themselves by getting four men suspended in that backs-to-the-wall semi-final against Barcelona.

And once the game started, it was just the kind of blood and guts encounter Terry excels in. Assisted by the obvious advantage of playing at home, Bayern got themselves on the front foot immediately and were rarely pushed back. The nearest they came was when former Chelsea man Arjen Robben glided past two defenders, then drilled a low shot towards goal, which Petr Cech managed to deflect high onto a post, with Robben barely able to believe he had failed.

Robben had another couple of chances, although neither were as good as the one that Muller volleyed wide. Robben and Muller combined to create an opening for Mario Gomez that he looked certain to capitalise on after a deft body movement had left Gary Cahill stranded, only for the Bayern sharp-shooter to lash over.

This team is amazing. It was written, I think, a long time ago. “Didier Drogba, Chelsea forward”

Handed a surprise start, Ryan Bertrand coped well. It was on the other side where Franck Ribery was proving to be a complete menace. What they did at the Nou Camp, though, has given Chelsea immense belief in their own durability.

Indeed, they might have had something to celebrate themselves had Juan Mata kept his curling free-kick down or Salomon Kalou been able to direct a shot away from Manuel Neuer after Frank Lampard and Drogba combined to set him up from an admittedly acute angle.

The pattern continued after half-time and Ribery thought he had grabbed a deserved opener when he snaffled the loose ball after Cole had blocked Robben’s goal-bound shot. The offside flag cut German celebrations short.

Cole’s involvement was part of an outstanding contribution from the full-back, who seemed to be in the way of nearly all the threats to Chelsea’s goal. He denied both Robben and Toni Kroos as Chelsea, enhancing his status one of the few truly world class players Roy Hodgson will have at his disposal at UEFA EURO 2012.

In response, Drogba, possibly making his last appearance for the club, unleashed a speculative long-range volley that dipped narrowly wide. The sense of Chelsea disappointment at Bayern finally breaching their defences must have been made more acute by the knowledge that when Kroos curled a cross beyond the far post, there appeared very little danger.

Muller intelligently headed the ball hard and down, which meant it bounced up towards the crossbar, possibly catching Cech by surprise as he seemed in the perfect position to prevent it ending up in the net. But Abramovich’s team are made of stern stuff.

And with barely a minute remaining, and Muller replaced by an extra defender in Daniel van Buyten, Drogba rose at the near post to power Mata’s corner home. This time there was nothing the goalkeeper could do, the ball speeding past Neuer at such pace, from so close, there was no time for reaction.

The drama continued into extra time as Drogba bundled Ribery over in the box. While the contact might not have looked much, it was enough to end the Frenchman’s evening. Robben seemed unaffected by the delay as his penalty headed for the bottom corner. Cech was equal to it though, making a superb save to his left and then smothering the rebound.

It was the kind of moment that made you think fate had decreed a Chelsea win, a belief only strengthened by Bayern passing up two clear openings in the second period of those additional 30 minutes. As Di Matteo pointed out yesterday, you make your own luck.

Daniel van Buyten failed to read Ivica Olic’s knock-down, otherwise he would have had a tap-in. Cahill prevented Gomez reaching Lahm’s cross in the final act of regular play before the dreaded shoot-outs. Mata missed the first for Chelsea, but when Ivica Olic and Schweinsteiger both failed, Drogba kept his nerve to win the trophy for the Blues and place at the FIFA Club World Cup Japan 2012.

Di Matteo has certainly hauled round a season that appeared to be heading for disaster in February. And the only ones not acclaiming that achievement were Tottenham Hotspur, who in a cruel twist are now denied a place in next season’s Champions League.