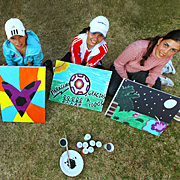 Sustainability Strategy, Football is played by millions of people around the world. As the guardian of the game, FIFA – with its 209 member associations – has a responsibility that goes beyond organising the FIFA World Cup™ and developing the game. FIFA sees it as its mission to contribute towards building a better future for the world by using the power and popularity of football.

The responsibility to coordinate FIFA’s sustainability initiatives lies with FIFA’s Corporate Social Responsibility Department. Since its foundation in 2005, the department has been developing programmes and collaborating with FIFA departments and external stakeholders to maximise the positive and minimise the negative impact of its activities on society and the environment.

Today, FIFA is active through numerous social initiatives, environmental projects and sustainability programmes that are implemented throughout the year and specifically for tournaments. Activities include the development and implementation of the 2014 FIFA World Cup Sustainability Strategy, social development programmes such as “Football for Hope”, campaigns like “20 Centres for 2010”, “Say No to Racism” and “My Game is Fair Play”, and environmental programmes such as “Green Goal”.

CSR at FIFA is about managing business processes sustainably to improve our impact on society and the environment. This requires a balanced approach to social development, environmental protection and economic growth.

The FIFA World Cup 2006 in Germany was the first FIFA tournament where social and environmental projects became an integral and official part of the event introducing a new era for “sustainability” at FIFA tournaments. FIFA’s joint campaign with SOS Children Villages raised over EUR 20 million for the construction of SOS Children Villages in Brazil, Mexico, Nigeria, South Africa, Vietnam and Ukraine. Together with the German LOC, FIFA launched the environmental protection programme Green Goal and invested over EUR 400,000 into carbon-offsetting projects.

Over time, more issues were added to the agenda of FIFA tournaments such as child safety, informal vendors, recycling, renewable energy, organic catering, and health promotion. It then became clear that a more comprehensive and longer-term approach was needed to ensure sustainable tournaments. Discussions with the LOC and the government for the 2014 FIFA World Cup had already kicked off by the end of 2010, earlier than for any other tournament previously. During 2011, FIFA and the LOC discussed and considered a host of issues and their relevance for the FIFA World Cup™ in Brazil, resulting in the first comprehensive sustainability strategy for a FIFA World Cup. (For more details, please see below)

Furthermore, and in assuring its commitment in the future, FIFA also amended the requirements of the bidding process for the 2018 and 2022 FIFA World Cups. All bidders had to provide comprehensive information on how they plan to tackle the social and environmental challenges of preparing and hosting the FIFA World Cup™. Collaboration on key social and environmental issues has already started with Russia and Qatar.

In developing the sustainability strategy for the 2014 FIFA World Cup, it was important for FIFA and the LOC to define a clear, ambitious and yet realistic focus for the approach. Staging the biggest single-event sporting competition in the world in a sustainable way requires careful consideration of many issues. Moreover, with its worldwide reach, the FIFA World Cup offers a platform to raise awareness and highlight many social and environmental concerns. Considering all these issues and managing expectations was essential in developing the current strategy.

The development of the sustainability strategy began in early 2011 with preliminary discussions and meetings with LOC and government representatives. It was followed by a three-day workshop of FIFA and the LOC in autumn 2011. The basis for these discussions were the ISO26000 social responsibility guidelines, the GRI reporting framework, previous social and environmental programmes at FIFA World Cups, the government’s policy agenda, and research in Brazil.

In evaluating and choosing the focus of the approach, FIFA and the LOC considered the level of control over and influence on a particular issue, as well as its relevance for Brazil. With this understanding and the subsequent selection of key issues for the 2014 FIFA World Cup™, FIFA and the LOC defined seven strategic objectives and over 100 small and larger activities for implementation in the lead up to and during the FIFA World Cup. (For more information see page 10 and 11 of the 2014 FIFA World Cup™ Sustainability Strategy).

FIFA and the LOC have formed a joint 2014 FIFA World Cup CSR Team to coordinate the implementation of the strategy and manage relations with stakeholders. A total investment of approx. USD 20 million will be dedicated by FIFA to implement the sustainability strategy. Further support for the sustainability effort will be provided by FIFA Partners, Commercial Affiliates, and other involved stakeholders.

Progress will be monitored and evaluated continuously by external experts, the CSR steering team, as well as the advisory board which will be composed of distinguished and experienced personalities.

A few examples of selected activities

 Green buildings: Many stadiums in Brazil are planning to achieve LEED certification for green buildings and many are installing solar panels on their roofs to generate renewable energy. In addition, FIFA and the LOC will organise certified training courses on sustainable management for stadium managers.

 Waste management: The objective of a new waste law in Brazil is to better control the handling and the destination of waste. FIFA and the LOC will ensure that waste management in stadiums and other venues will be dealt with according to the new regulations and will promote recycling in collaboration with local cooperatives.

 Volunteer training: Becoming a volunteer for the 2014 FIFA World Cup Brazil™ and welcoming the world to Brazil will be a once-in-a-lifetime experience for all participants. FIFA and the LOC will organise additional training modules to supplement the basic volunteer training and help enhance the future employment opportunities of the participants.

 Community support: Numerous local organisations in Brazil are tackling social challenges in their communities with the aid of football. FIFA and the LOC will support such organisations with funding and know-how, through FIFA’s well-established Football for Hope initiative.

 Climate Change: Global warming is one of the most pressing issues of our time. One of the main factors in the change in temperature is the Carbon Dioxide (CO2) that is released into the atmosphere through human activities. FIFA and the LOC will estimate the carbon footprint of the tournament and develop measures to avoid, reduce and offset its emissions.

 Capacity development: Through its Football for Hope initiative, FIFA will organise various forums for community-based organisations in Brazil and abroad to discuss and exchange ideas on the effective use of football as a tool to tackle social challenges.