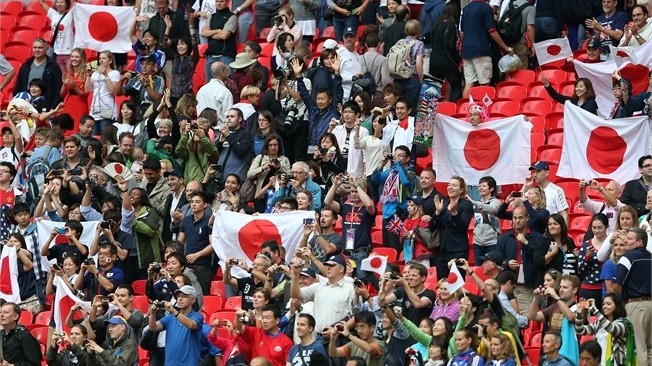 Tokyo – Japan, August 18, 2012: The FIFA U-20 Women’s World Cup Japan 2012 begins this Sunday with the host nation and reigning Asian champions among the favourites for the title. And as kick off nears for the Young Nadeshiko’s opener against Mexico in Miyagi Prefecture, one of the areas hit hardest by the 2011 earthquake and tsunami disaster, excitement is building among the team’s players fans.

Japan will play their first two group games in Miyagi, an area that holds a special significance for several Young Nadeshiko players. Midfielder Ayu Nakada went to high school there, and is looking forward to playing in front of some familiar faces.

“I attended school here for three years,” she told FIFA.com. “I know many people in Miyagi, so I’m thrilled to be playing here.”

The INAC Kobe Leonessa player was in her school dormitory when the massive earthquake struck on 11 March. “We didn’t suffer any damage from the tsunami, but the dorm shook like crazy in the earthquake. It was terrifying,” she said.

In addition to devoting herself to preparing for the upcoming tournament, Nakada has been meeting supporters and offering encouragement to people still rebuilding from the disaster. As rain fell after a recent practice, Nakada and some other players signed autographs and posed for photographs with people who had come to watch. The tournament slogan “Hope Leads” struck a chord with Nakada, who feels a responsibility to ensure that the team performances on the field can inspire the Tohoku region—and all of Japan—as the recovery continues.

“I’m an attacking player so I want to be in the front line. I hope I can show all the spectators something special during our games. Hopefully we’ll get some big crowds,” Nakada said.

Anticipation is also building among Miyagi residents as the tournament draws near. “I’m looking forward to it,” eight-year-old Mai Nasuno said after watching the U-20 Mexican women’s team practice near Miyagi Stadium in the town of Rifu. When asked who her favourite players are, Nasuno reeled off the names Homare Sawa, Aya Miyama and Nahomi Kawasumi, three core members of the Nadeshiko team that triumphed at last year’s FIFA Women’s World Cup™ and won the silver medal in the Women’s Olympic Football Tournament in London this month. Nasuno started playing football last year, but already she has lofty aspirations, saying, “I want to play for Nadeshiko Japan.”

Twelve-year-old Ando also hopes the recent success of Japan’s national women’s team rubs off on the U-20 team. “Japan won the silver medal at the London Olympics, and I think Japanese women’s football is improving so much,” said Ando, who has been playing football for three years. “Nadeshiko Japan showed me that when a team moves well as a whole, it can become a potent attacking force. I hope to learn something similar from the Young Nadeshiko.”

Erina Suzuki, 24, was born and raised in Rifu and has played football since she was a child. She played for FC Takahashi Kibi International University, the team of U-20 forward Asuka Nishikawa, and works for Fukushima United FC, an amateur club in disaster-hit Fukushima Prefecture. She is thrilled that the U-20 squad will open their quest for FIFA World Cup glory in Miyagi.

“The Young Nadeshiko played a friendly match in Fukushima on August 13, and the place was absolutely buzzing,” said Suzuki. “I’m sure the senior team’s success played a part in that. Miyagi and the Tohoku region have never hosted an international women’s football event, so I’m delighted the U-20 tournament will be played in my hometown.”

Excitement is also building in Sendai, Miyagi’s largest city. Yoshinari Iwabuchi, owner of the Barbe cafe-bar, has been counting down the days until the tournament begins, although he was disappointed that his namesake, prolific forward Mana Iwabuchi, was not selected for the squad to allow her to recover fully from toe surgery she had before the London Games.

“It’s a pity she won’t be playing,” said Iwabuchi, 33. Nevertheless, he is confident that the upcoming football spectacle will be a success in more ways than one.

“After the disaster last year, we were working non-stop preparing meals for local people, even though we had hardly any electricity. We were making as many rice balls and sandwiches as we could, as fast as we could,” Iwabuchi said. “But this area has slowly gotten back to its feet. My bar is jam-packed on days when there’s a football match on. It’s so touching that a fantastic FIFA tournament will be held in Miyagi. I’d like to watch the games at the stadium, but if I can’t, I’ll watch the Young Nadeshiko on TV with everyone. I’ll be cheering them on!