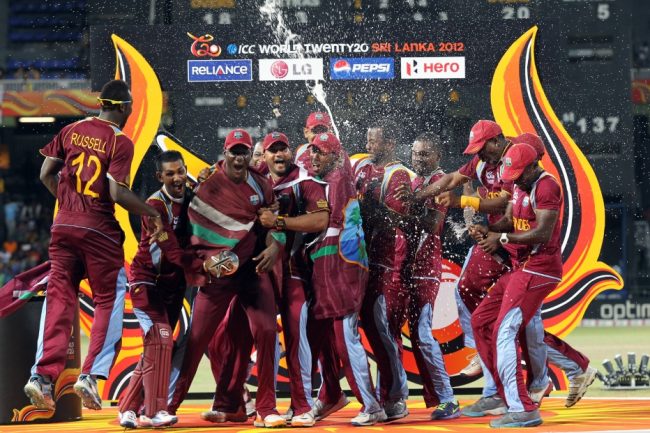 Colombo, Oct 07, 2012: There was no fairytale finish for the host nation, no culmination of a dream for its brave captain. Instead, international cricket’s most admired team walked away with the spoils, as West Indies justified pre-tournament favorite status by lifting the ICC World Twenty20 2012 crown in sensational fashion.

West Indies’ first global title since it won the ICC Champions Trophy 2004 at The Oval in London thus consigned Sri Lanka to a fourth consecutive defeat in the final of an ICC tournament, a miserable run that dates back to 2007.

A fourth of the way into the title clash in front of a capacity 35,000-strong crowd – including Sri Lankan President Mahinda Rajapaksa – at the R Premadasa Stadium on Sunday night, the West Indies had all but batted itself out of the game. Then, it found a timely hero in Marlon Samuels.

Batting like a man possessed, Samuels single-handedly resurrected an innings that had been stifled by the parsimony of Angelo Mathews and the prolific wicket-taking ways of Ajantha Mendis. Samuels tore into Lasith Malinga, arguably the best Twenty20 bowler of the past few seasons, on his way to a stirring 78 off 56 deliveries. In the process, he carried West Indies to 137 for 6.

It wasn’t the most intimidating total, but on a slowing surface that cried out to be exploited by the spin resources at Darren Sammy’s disposal, it needed some getting. Through brilliance with the ball, commitment in the field and fuelled by the desire to do it for the Caribbean people, the West Indies beat Sri Lanka at its own game, bowling the host out for 101 to complete an emotion-soaked and comprehensive 36-run victory.

Sri Lanka needed at least one of its top three – the experienced unit of Mahela Jayawardena, its inspirational captain, Tillakaratne Dilshan and Kumar Sangakkara – to anchor the chase. Dilshan was knocked over in the second over by a beauty from Ravi Rampaul, and while Jayawardena and Sangakkara did put on 42, they took 50 deliveries in doing so as West Indies kept things remarkably tight.

Sangakkara’s dismissal, trying to force the tempo, set in motion an extraordinary passage of play as wickets tumbled in a rush. There is no greater advantage in a cup final than scoreboard pressure; Sri Lanka completely succumbed to it, especially after Jayawardena’s second-gear effort was terminated by Sunil Narine, who sowed the early seeds of doubt by ripping his first couple of deliveries past Sangakkara’s hopeful blade.

Sri Lanka completely lost its head after its captain’s dismissal and played itself out of contention through two silly run-outs. The sound of silence gripped the stadium but the West Indies, Gangnam Style and all, couldn’t be bothered.

Until Samuels’s blitzkrieg, though, the West Indian innings was headed nowhere. Runs came in a trickle as Sri Lanka began brilliantly, keeping up the pressure through Mathews and Nuwan Kulasekara. Johnson Charles fell prey to frustration in the first over from Mathews, a wicket-maiden, after four dot balls, while Kulasekara conceded only wide in his first over to Chris Gayle.

The West Indies had limped to 12 for 1 after five, and when Ajantha snared Gayle with a straighter one in his first over – Gayle had never looked like he was in any control, taking 16 deliveries for a tortured three – the West Indies finished the Power Play at 14 for 2, easily it’s lowest ever. The first ten overs yielded just one four; otherwise, forget the boundaries; even the twos had completely dried up. At 32 for 2 after 10, Sri Lanka had a serious stranglehold.

In the final analysis, the 11th over proved the most critical one of the game. It only produced six runs, but it was the over in which Samuels was reprieved, by Kulasekara running round to his right from long-off as the batsman tried to drive Jeevan Mendis’s leg-spin over the boundary. Samuels was then on 20, out of 33 for 2. Taking that as the cue to stamp his authority on the final, Samuels cut loose in some style.

His assault on Malinga had to be seen to be believed. It wasn’t as if Malinga bowled too badly; Samuels, though, was in the zone, unleashing a bucketful of fury on the hapless bowler. What was pleasing about Samuels’s pyrotechnics was that he played fabulous cricketing shots. There was one gorgeous drive over cover and a top-edged pull, both easily clearing the boundary rope, but otherwise his breathtaking innings was characterized by brilliant use of the straight field.

Dwayne Bravo played no more than a bit part in the only partnership of substance, 59 off 49 for the third wicket, until he was adjudged leg before to Ajantha, but that association had given the West Indies renewed hope.

That hope burgeoned the longer Samuels stayed at the wicket. Having taken 21 off Malinga’s second over, he smashed Jeevan for 14 in his second, then picked up 19 off Malinga’s third, with two more sixes and a peach of a cut-drive behind point. In all, he hammered one four and five sixes off Malinga alone, leaving him with figures of none for 54 from four overs.

Contrast this with Mathews, who bowled four overs for 11 and Ajantha, who finished with 4 for 12 from his quota, and it puts the Samuels innings in perspective. Ajantha did cut a swathe through the middle order, but even after Samuels fell playing one stroke too many to give Akila Dananjaya his only success, the West Indies was far from finished.

Sammy dented Kulasekara’s figures in the last over by alternating between helter-skelter running and two beefy hits to pick up 16. At the break, the West Indies total appeared competitive but gettable. By the end, it was a mile too far, again, for Sri Lanka. —- ICC