Cardiff, June 13, 2017: India captain Virat Kohli has reclaimed the top batting spot, while Australia’s pace ace Josh Hazlewood has achieved the number-one position in the bowlers’ rankings for the first time in his career in the latest MRF Tyres ICC ODI Player Rankings, which were released on Tuesday morning following the conclusion of the last round of league matches in the ICC Champions Trophy 2017. 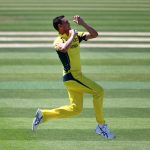 Kohli, who is ahead of Warner by just one point, had enjoyed just four days at the top in January 2017, but will now be aiming to do better when he faces Bangladesh in the second semi-final at Edgbaston on Thursday.

India’s opener Shikhar Dhawan has continued his love-affair with the ICC Champions Trophy by returning into the top 10. The left-hander has vaulted five places to 10th following scores of 68 against Pakistan, 125 against Sri Lanka and 78 against South Africa.

Dhawan’s rise means his team-mates Rohit Sharma and former captain Mahendra Singh Dhoni have slipped one place each to 13th and 14th, respectively, while Yuvraj Singh has gained six places and is now in 88th spot.

Fast bowler Bhuvneshwar Kumar has led the charge of India’s bowlers by vaulting 13 places to share 23rdspot with Afghanistan’s Hamza Hotak. Umesh Yadav has gained two places and is now 41st, while Jasprit Bumrah is 43rd after rising three places.

However, India’s spinners have slipped in the latest rankings with Ravichandran Ashwin dropping two places to 20th and Ravindra Jadeja falling three places to 29th.

England’s impressive form in the ICC Champions Trophy is reflected in the latest player rankings.

Eoin Morgan has slipped one place to 18th and Jos Buttler has dropped two places to 19th followingBangladesh opener Tamim Iqbal’s rise from 19th to 17th in the latest rankings.

Apart from Tamim, wicketkeeper-batsman Mushfiqur Rahim has retained his 21st spot, Shakib Al Hasan has moved up one place to 30th and Mahmudullah has climbed six places to 37th position.

Pakistan, which takes on England in the first semi-final in Cardiff on Tuesday, also has something to celebrate in the latest rankings.

Its gutsy wicketkeeper-batsman and captain Sarfraz Ahmed has jumped five places to claim 31st ranking in the batting table, fast bowler Hassan Ali has stormed to a career-best 19th rank after vaulting 16 places, Imad Wasim has gained eight places to occupy 31st spot and Mohammad Amir has earned one spot and is now 37th.

World champion Australia’s only consolation in the latest player rankings is that its fast bowler Josh Hazlewood has claimed the coveted number-one position for the first time in his career.

Hazlewood is currently the leading wicket-taker in the tournament with nine wickets in three matches, including six for 52 against New Zealand in a game which was abandoned due to rain.

Hazlewood, who is the first Australia bowler to top the bowling charts since October 2015 when Mitchell Starc peaked to the top, has leapfrogged Imran Tahir, Starc and Kagiso Rabada.

There is no change in the top five of the all-rounders’ list, which is headed by Bangladesh’s Shakib Al Hasan. However, Stokes has gained one spot and is now sixth, while Jadeja has broken into the top 10 in eighth position after rising three places.

Away from the ICC Champions Trophy, West Indies and Afghanistan are involved in a three-match ODI series, which is presently locked at one-all. Following Afghanistan’s shocking win in the opening match, wrist spinner Rashid Khan has rocketed 18 places to seventh place after claiming seven for 18.

The defeat in St Lucia on 9 June has severely dented ninth-ranked the West Indies as it has dropped from 79 points to 77 points in the MRF Tyes ICC ODI Team Rankings. Even if it wins the series-decider on 14 June, it will finish on 78 points, which is not good news considering 30 September is the cut-off date for automatic qualification for the ICC Cricket World Cup 2019.

Meanwhile, there is no change in the rankings of the top three sides following 12 matches in the ICC Champions Trophy, though number-one ranked South Africa has dropped three points and second-ranked Australia has conceded one point.

However, England has swapped places with New Zealand and is now ranked fourth, three points ahead of the Black Caps.

In the upcoming matches, India will have a chance to top the table. But for that to happen, it will not only want to face England in the final but also need to retain the title. In this scenario, Kohli’s side will join South Africa on 119 points but will be ranked ahead of the Proteas by a fraction of a point.

The following are various permutations for the upcoming matches in the ICC Champions Trophy: