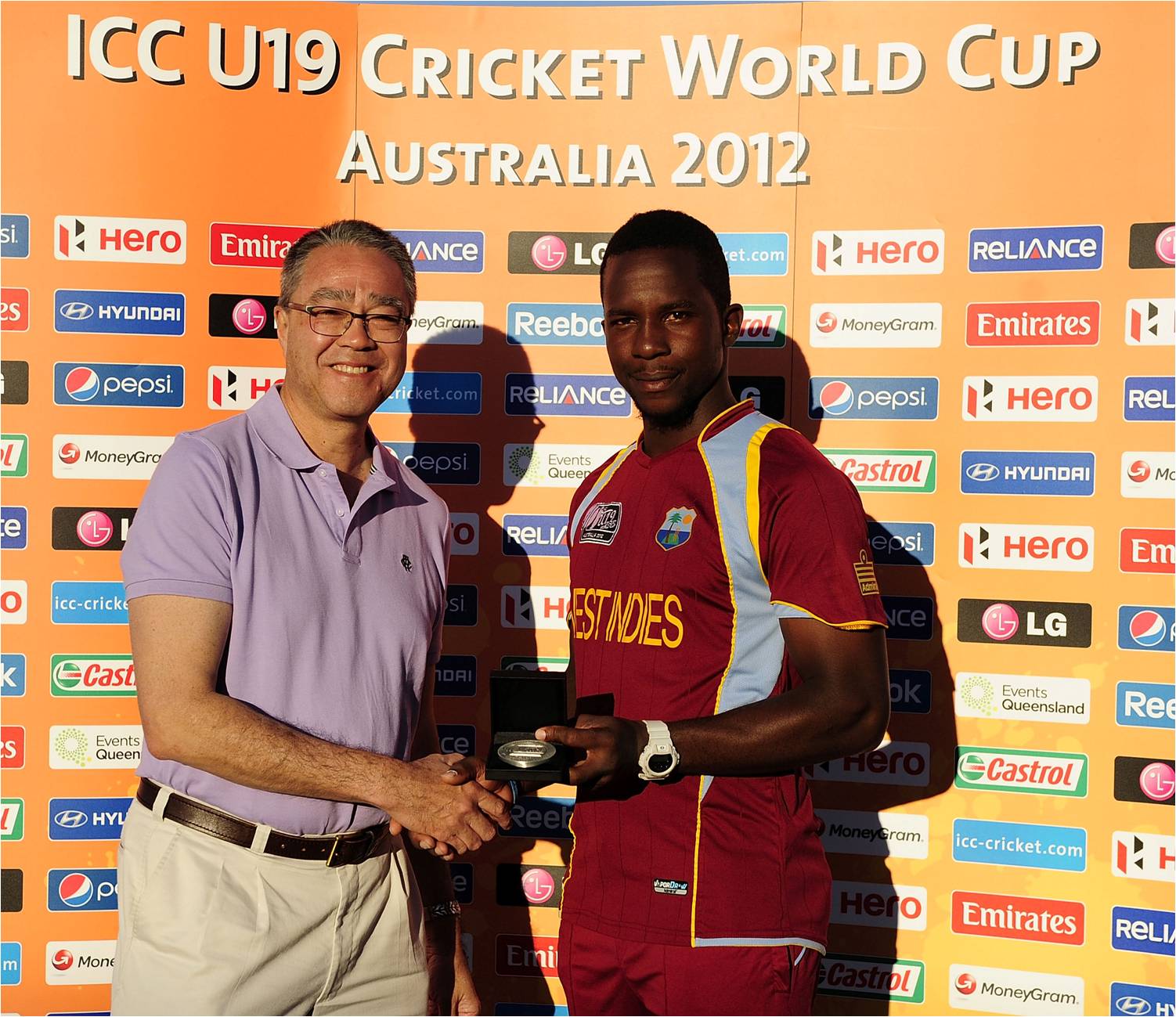 Queensland – Australia, August 12, 2012: The West Indies’ decision to base themselves in Australia for an extended period prior to the start of the ICC U19 Cricket World Cup 2012 provided an immediate outcome on Sunday, with an impressive four wickets victory over India in a Group C fixture before the ESPN STAR Sports’ cameras at Tony Ireland Stadium in Townsville, Queensland.

The Caribbean crew was unbeaten in four warm-up games in Brisbane before heading to Townsville and showed the value of a strong batting line-up and a fast bowling attack that is relishing the bouncy pitches in Queensland.

Meanwhile, in the other matches of the day, South Africa got its tournament underway in similar fashion by overcoming Bangladesh by 133 runs in Brisbane, New Zealand did not miss a beat against qualifier Scotland by winning its Group B match by 39 runs, and England bounced back from Saturday’s defeat to Australia to beat Ireland by seven wickets in a Group C match in Townsville. After the first two days, all teams have now played at least one game.

Wicketkeeper-batsman Smit Patel top scored for the side, hitting a patient 51 (99b, 5×4) before being bowled by paceman Ronsford Beaton who finished as the most successful West Indies bowler with figures of 10-1-33-3.

Right-arm medium-pacer Kyle Mayers claimed the important wicket of India captain Unmukt Chand and was consistent, ending with two for 35 from 10 overs.

But John Campbell (36) and Anthony Alleyne (52) put the West Indies back on track with a 58-run third wicket partnership. For the fifth wicket, Alleyne and Kyle Mayers (43) put on another 58 runs after the West Indies had slipped from 71 for two to 75 for four.

India’s left-arm spinner Harmeet Singh was handy with the ball picking up three wickets but unfortunately not enough to successfully defend the Indian total and the West Indies claimed victory with 17 balls to spare.

Mayers, who was adjudged player of the match, later said: “India had some quality spinners and I thought they bowled really well with great variation. I tried to bowl as tight as possible to create some pressure and eventually it worked out.

“There is always room for improvement; I would have liked to bat right through to the end.

“It is always good to start with a win and we would like to keep winning as a habit and continue on and win all of our games,” he said.

England bounced back from its loss to Australia on the opening day of the tournament to beat Ireland by seven wickets. The Irish batting line-up failed to fire with the English bowlers making light work of its top order, dismissing the side in the 42nd over.

Tyrone Kane (28) and George Dockrell (26) were the best of the Irish batsmen, contributing over half of the modest total of 109 set for England to chase.

Left-arm quick Reece Topley was dynamic with the ball, finishing the day with the impressive figures of three for 14 from nine overs to later collect the player of the match award.

England lost its openers early. But the Irish bowling attack could not stop England from patiently chipping away to surpass the total in the 36th over.

The experience of 12 first-class, 18 List A and 17 T20 games helped South Africa’s opener and wicket-keeper Quinton de Kock to stay focussed as he helped his side to a one-sided victory over Bangladesh at Allan Border Field in Brisbane.

De Kock’s knock of 95 (93b, 9×4, 2×6) was the mainstay of South Africa’s total of 294 for eight but the 19-year-old from Johannesburg admitted afterwards he had been feeling the pressure coming into their opening game of the tournament.

“I’m still getting used to the conditions. The pitches are not very different to home, maybe it is a bit bouncier here.

“There are pressures of playing in a competition like this one. Playing first class cricket has helped me but the level we are playing at here is not much different to that.”

Chasing South Africa’s total of 294 for eight, Bangladesh was unable to replicate its good batting form from the opening day’s win over Sri Lanka, and was dismissed for 161 from 34.3 overs.

Moore, a late replacement for the usual South Africa spearhead Rabian Engelbrecht who was injured two days before the squad left for Australia, took three for 44 from 10 overs today.

“Rabian was important to us but we have covered his loss pretty well, with Vincent, and Lizaad Williams doing a good job for us today,’’ de Kock said.

Williams did not take a wicket but his no wickets for 28 from seven overs ensured the Bangladesh top order was not able to get a flying start to its run chase.

New Zealand’s Will leads from the front

A man of the match effort by captain Will Young was just the ticket for New Zealand as it overcame qualifiers Scotland by 39 runs at John Blanck Oval. Scotland captain Paddy Saddler won the toss and invited New Zealand to bat.

Young, who has played four-first class matches for Central Districts, and Robert O’Donnell (50, 75b, 3×4) were solid against the willing Scottish attack, led by right-arm medium-pacer Ruaidhri Smith, who finished three for 34 from 10 overs with two maidens.

New Zealand seamer Connor Neynens caught the eye with three for 24 from10 overs, including one maiden.

Player of the match – Will Young (New Zealand)