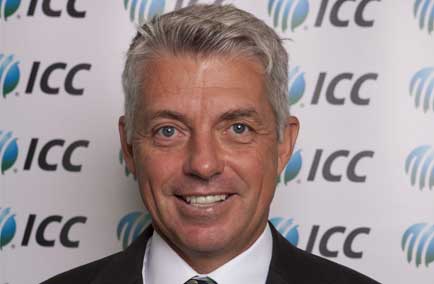 Dubai, May 10, 2012: The ICC Board will recommend to the ICC Annual Conference that David Richardson, the ICC General Manager – Cricket, succeeds Haroon Lorgat as the ICC Chief Executive Officer.

The ICC Nominations Committee met in Mumbai at the weekend to interview four ‘outstanding candidates’ for the Chief Executive’s role and on Thursday obtained the ICC Board’s support via teleconference for Mr Richardson’s nomination.

Johannesburg-born Mr Richardson, 52, has been the ICC General Manager – Cricket for the last 10 years and has an outstanding CV having represented South Africa as a wicketkeeper in 42 Test matches and 122 One-Day Internationals.

On retiring from international cricket in 1998, Mr Richardson, a qualified lawyer, maintained close contact with the game as both a Business Director with Octagon SA and as a media commentator before becoming the ICC’s first General Manager in January 2002.

After hearing of his nomination, Mr Richardson said: “It is a great honour to be nominated to be Chief Executive of the ICC. I am delighted with this opportunity and thank the ICC Board for their approval.

“It has been a privilege to serve as ICC General Manager – Cricket, and that work will continue until such time as the ICC Annual Conference ratifies my nomination. I am looking forward to working closely with all the membership and stakeholders in the game.

“It is an honour to be following a fellow South African, Haroon Lorgat, in this role. I have learnt a lot under his leadership and thank him for his support in the last four years.”

ICC Vice President Alan Isaac, who was tasked by the ICC Board with identifying a successor to Mr Lorgat, said: “David Richardson was an outstanding candidate who not only had important knowledge of the ICC administration, its staff and its operations but also has unquestioned cricketing knowledge having represented his country so admirably.

“His appointment will provide continuity and a smooth transition after Haroon Lorgat steps down after ICC Annual Conference in Kuala Lumpur at the end of June.

“I would like to put on record my appreciation for Haroon and what he and the ICC staff have achieved in the last four years. There have been many challenges which have been met head on.

“I am sure all my colleagues on the nominations committee will agree that this was a very difficult assignment as we were presented with not only three other experienced and talented candidates but also an extremely impressive longer list of contenders for this important role.

“I am grateful to the final four for travelling to Mumbai and I am sure they will understand and respect our decision.

“I am pleased that the ICC Board has also endorsed David Richardson and now we are taking this nomination forward to ICC Annual Conference for its blessing.

“I would also like to thank the international executive recruitment firm Egon Zehnder for their assistance and tireless work in producing such a high quality field of candidates.

“I am looking forward to working closely with David over the next two years and I am sure that he will carry the support of all the Full Members and the ICC staff.”

The ICC Annual Conference is to be held in Malaysia capital Kuala Lumpur on 28 June 2012.

The ICC Board consists of the president or chairman from each of the 10 Full Members plus three Associate Member representatives.