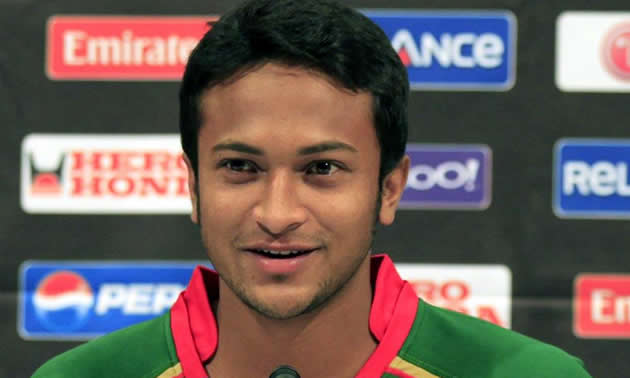 Dubai, May 06, 2013: Bangladesh’s Shakib Al Hasan has been fined 75 per cent of his match fee after pleading guilty to a Level 2 breach of the ICC Code of Conduct during Zimbabwe’s victory in the second One-day International at Bulawayo on Sunday.

Shakib was found to have breached Article 2.2.1 of the ICC Code of Conduct for Players and Player Support Personnelwhich relates to “showing serious dissent at an Umpire’s decision during an International Match”.

On Monday morning, the all-rounder admitted the offence and accepted the proposed sanction offered to him by Chris Broad of the Emirates Elite Panel of ICC Match Referees. As such, there was no need for a formal hearing.

The charge related to an incident in the 31st over of Bangladesh’s innings when Shakib, after being given out lbw off Prosper Utseya, expressed his displeasure by smashing his bat into his pad and in the process nearly hit Zimbabwe wicketkeeper Brendan Taylor, before leaving the crease.

Explaining his decision, Mr Broad said: “This type of a reaction from a senior player and a former captain is unacceptable. When the umpire’s finger goes up, the batsman must leave the crease without showing his emotions regardless of what he thinks of the decision.”

The charge had been laid by the on-field umpires Owen Chirombe and Johan Cloete, third umpire Jeremiah Matibiri and fourth umpire Russell Tiffin. All Level 2 breaches carry a penalty of between 50 per cent and 100 per cent of a player’s match fee and/or up to two suspension points. —- ICC