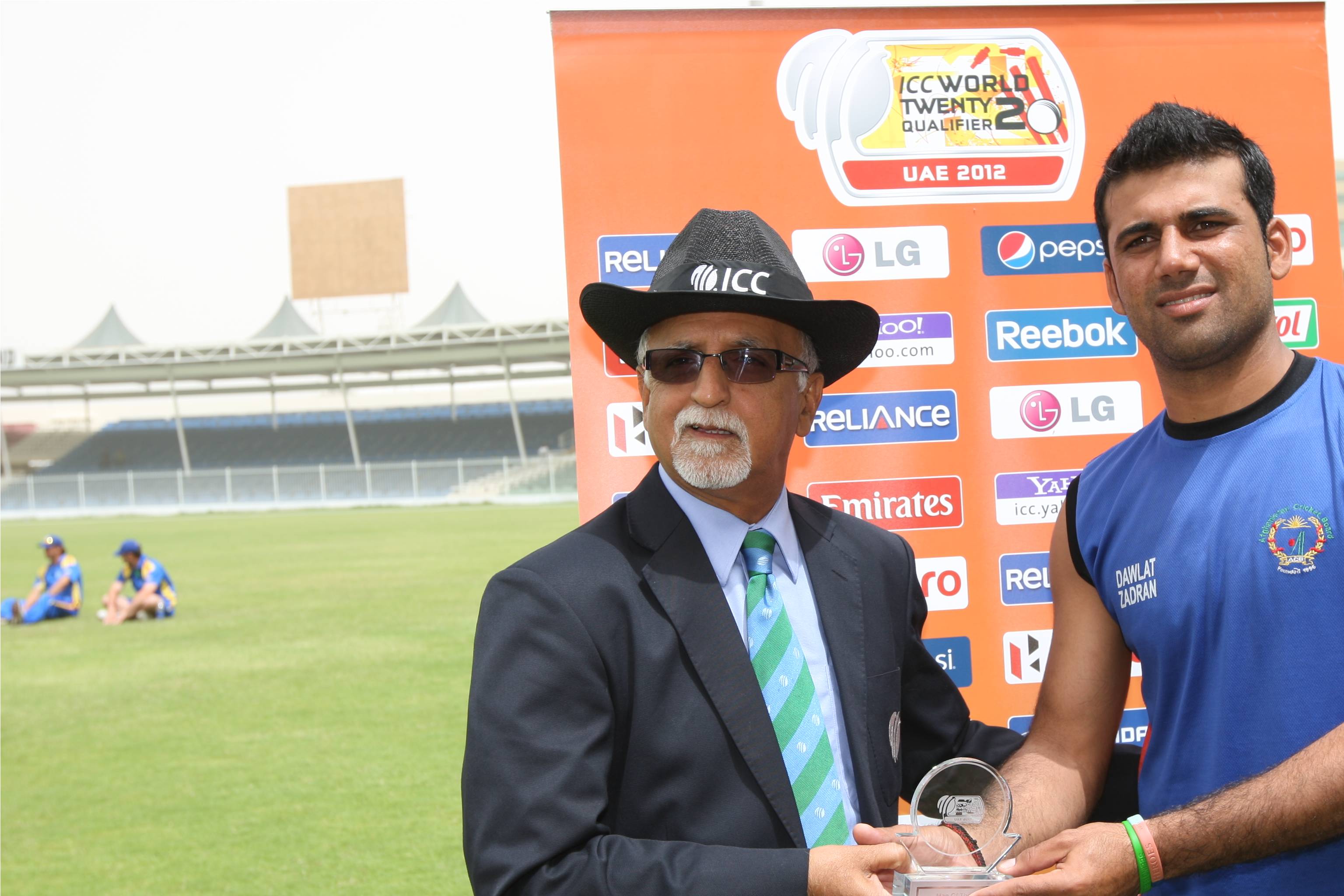 Dubai, March 20, 2012: After 56 high quality matches in eight days, defending champion Afghanistan and seventh-seed Namibia have reached the 1st Qualifying Final of the ICC World Twenty20 Qualifier UAE 2012 after they topped their respective groups following the conclusion of the first round matches on Tuesday.

Afghanistan made short work of Bermuda by 15 runs while Namibia defeated Italy by 27 runs. These were their seventh straight victories.

This meant Afghanistan and Namibia finished unbeaten in Group A and B, respectively and as such, progressed to the 1st Qualifying Final which will be staged at the Dubai International Cricket Stadium in Dubai on 22 March. The winner of this match will qualify for the tournament proper to be played in Sri Lanka from 18 September to 7 October.

Besides the table-toppers, the Netherland and Canada have qualified for the next stage from Group A while Ireland and Scotland have moved on from Group B. These four sides, in a cross-over format, will play in the Preliminary Round and the winner will square-off against the loser of the 1stQualifying Final on the morning of 24 March at the Dubai International Cricket Stadium.

The winner of the morning match will complete the 12-team line-up for the Sri Lanka tournament while the evening match will not only produce the tournament winner but will also decide which sides ends up in which group. The winning side will join Australia and the West Indies in Group B while the losing team will complete Group A which also includes defending champion England and 2007 winner India.

Ireland’s 44 runs victory over Oman means the European side finished in second place in Group B and will now take on Canada who defeated Nepal by 18 runs to finish third in Group A in a low-scoring fixture. Netherlands comfortably defeated Hong Kong by 83 runs to claim second position in Group A and it will now take on Scotland which qualified in third place in Group B despite suffering a surprise seven-wicket defeat against the USA.

The schedule for the play-offs on Thursday, 22 March, will now feature a change. The Canada v Ireland fixture will now be played at the Dubai International Cricket Stadium and the Netherlands v Scotland will move to the ICC Global Cricket Academy Oval 1.

Scotland shocking’s defeat left it on equal points with Kenya but Gordon Drummond’s side moved ahead by the smallest of margins of +0.007 on the net run-rate. The USA, chasing Scotland’s 161, achieved victory with one ball and seven wickets to spare. Had it won with two balls to spare, then Kenya would have moved into the second round ahead of Scotland.

The USA captain Aditya Mishra, who was later adjudged man of the match for his 62 off 54 balls with five fours and two sixes later said: “It feels great to be Man of the Match. It’s great to be in Dubai. The team’s put in a lot of hard work throughout the tournament and I think the results show what our team is capable of.

“I feel pretty good, but when the team wins it feels double good.”

An unhappy Richard Berrington of Scotland said: “We were obviously absolutely delighted to hear that we have got through but we weren’t too happy with our performance, which meant it was quite nerve wracking. We wanted to make sure that we got straight through, but obviously it didn’t happen that way, and now we have a big game against the Netherlands.”

At the ICC GCA Oval 1, Dubai Sports City, Afghanistan maintained its winning streak when it defeated Bermuda by 15 runs. Afghanistan, batting first, scored 177 for five with Mohammad Shahzad (64 not out), Asghar Stanikzai (26), Mohammad Nabi (22) and Karim Sadiq (22) being the main scorers.

In turn, Bermuda finished at 162 for seven. Janeiro Tucker scored a 16-ball 37, including four sixes in an over from Samiullah Shenwari.

Shahzad later said: “I’m very happy, my team is happy, because we have qualified for the next stage. We want to qualify for the ICC World Twenty20 2012, because the players have worked very hard together, and the trainers, coaches, physios and everybody involved is working very hard to do well.”

Namibia defeated Italy by 27 runs after openers Raymond van Schoor (73 not out) and Gerrie Snyman (78) put on 144 runs for a first wicket, highest of the tournament so far, which propelled Namibia to 194-2. In turn, Italy finished at 167 for eight with Gareth Berg top scoring with 47.

Namibia coach Johan Rudolph commented: “We’re very happy with our performance. We enjoyed the pitch today. We struggled a bit in Sharjah with the low and slow pitches. In Namibia, we like the ball to come on to the pitch. But we’ve played here before four or five times already, so we basically know the conditions in Dubai.”

Ireland cruised to a 44 runs victory over Oman in its Group B fixture, leaving Oman winless. Ireland, batting first, scored 160 for six with Gary Wilson top scoring with a fine 52 not out. In turn, Oman finished at 116 for six which included Jatinder Singh’s 56 not out.

Man of the match Wilson said: “It was nice to get a half-century and feels like I am hitting the ball nicely and hopefully that form will continue into the knock-out stages. With the loss of John Mooney for the tournament and Alex Cusack for today’s game it meant that Nigel Jones and Kevin O’Brien who don’t normally bowl as much are going to have more of a chance and it shows what depth we’ve got in the team.”

In Sharjah, the Netherlands’ total of 201 for 5, the highest of any team at the tournament, proved too much for Hong Kong which finished at 118 for seven to lose by 83 runs. Strong performances from Stephan Myburgh (68), Michael Swart (38), Tom Cooper (42 off 25 balls, two for eight) and Tim Gruijters (two for 11) made sure the Dutch achieved second place in Group A.

Also in Sharjah, Nepal lost out on an opportunity to feature in the play-offs after the side lost by 18 runs. Canada batted first and made 101 for eight in 20 overs. Nepal found the going tough before it was bowled out for 83 in 18.2 overs. Jimmy Hansra’s 29 not out off 34 balls was the best batting performance of the match.

Hansra, who was declared man of the match, later said: “It was difficult surface to bat on. I thought 120 would have been a par score. But then we ended 20 runs short. Our fielding was top class and that made all the difference.”

The tournament will resume on Thursday after Wednesday’s rest day.