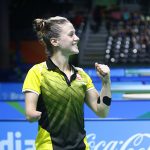 PARTYKA is no stranger to breaking records at the Paralympics:
• Youngest ever Paralympian in table tennis history when she competed in her first Paralympic Games in Sydney 2000 at the young age of 11.

• Youngest Paralympic table tennis Champion when she won her first Paralympic Gold medal at Athens 2004 at 15 years and 2 months old.

• First table tennis athlete to compete in both the Olympic and Paralympic Games when she qualified for Beijing 2008 Olympic Games.

“Today I was prepared, I was ready and I played the best I have played in the whole tournament.”

PAOVIC had represented Croatia at the Beijing 2008 Olympic Games and was ranked within the top 50 in the world before a life threatening car accident en route to the airport in Paris following a match. She suffered a severe cervical spinal injury leaving her with limited use of her legs.

The 33-year-old Croatian shared “I’m not a calm player who can look calm and play fantastically, I need to push myself to concentrate. I don’t move really, they all move much better than me and this is an advantage for them, so I have to push myself to be somehow movable. This is not easy as I am the only one who has a spinal cord injury.”

“To have a spinal cord injury like me and to play standing table tennis is really difficult but if I wasn’t as crazy as I am, I don’t think I could do that,” added PAOVIC.

Netherland’s Kelly VAN ZON, whose amazing diving shot earlier in the group stage against Turkey’s Kubra KORKUT went viral, faced off with KORKUT for the second time in Rio, this time in the final fight for Paralympic glory.

Despite coming close to securing each games in the Gold medal match, two-time Paralympic Champion LEI Li Na could not withstand the contest from her fellow teammate LIU Meng, losing 0-3 (12-10, 13-11, 13-11) to the first time Paralympian.

World number ones in Class one and two respectively, Great Britain’s Robert DAVIES and Fabien LAMIRAULT proved their status on the top of their list. DAVIES overcoming JOO Young Dae (KOR) 3-1 (14-12, 4-11, 11-9, 11-5) in the Class 1 Gold medal match, while LAMIRAULT beat Poland’s Rafal CZUPER to claim the Men’s Class 2 title.

With all the Singles events completed at the Rio 2016 Paralympic Games, it is time for the Paralympians to fight for the country in the Team event that will start tomorrow, 14 September 2016 at Riocentro Pavilion 3. —- ITTF