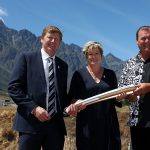 March 31, 2018: For a small country, surrounded by ocean at the bottom of the world, we need connections to thrive.

We need those connections to grow and to contribute, to identify our similarities with others, and see our differences too.

The Commonwealth Games Movement provides us with these connections.

In just a few days’ time, the Commonwealth Games on the Gold Coast will see friends – and rivals – representing 30 percent of the world’s population, gather right next door.

While New Zealand makes up a small proportion of this population, we’ll be fielding our largest ever Commonwealth Games team.

As the New Zealand Commonwealth Games Association (CGA), we’ll have a chance to showcase the best our country has to offer through sport. We have no doubt our athletes will be ready to take on the challenge.

Athletes – like pole-vaulter Eliza McCartney who won bronze at the Rio 2016 – are fully focused on these games.

McCartney jumped her personal best at a recent event in Auckland, and is now set to make her mark on the Gold Coast. As a New Zealander, she’ll be noticed not just by the Kiwis back home, but by the rest of the Commonwealth, too.

Like Yvette Williams, who won three gold medals at the 1954 Vancouver Commonwealth Games in athletics (discus, long jump and shotput), or Sir John Walker, who lined up against Filbert Bayi from Tanzania at the 1974 Commonwealth Games in “the greatest middle distance race of all time”, Eliza McCartney and the rest of our 251-strong team will make connections, showing the world who we are and helping to shape our collective Commonwealth history.

The Commonwealth will see New Zealand’s determination, our capability, and the pride our athletes have in their country. They will see the silver fern, the symbol of New Zealand.

Back home, New Zealanders will also forge connections with our athletes.

The flexible and targeted Commonwealth Games programme is made up of the sports we play in our communities.

Lawn bowls, badminton and netball are core to the New Zealand identity and our elite athletes in these fields are not always recognized.

Our gymnasts, weightlifters and wrestlers train in gyms after work and on weekends, but don’t always have an opportunity to shine on the world stage.

With the majority of our team made up of ‘non-carded’ athletes, the Commonwealth Games is the place where the breadth and depth of New Zealand sport, and sporting character, can be seen.

We New Zealanders are equally are inspired by our friends and rivals from other Commonwealth nations.

We know these athletes through the contests our athletes have had alongside their brothers and sisters from the Commonwealth family.

Because of our shared history, language and systems we feel more connected to them. Their stories and achievements have all the more impact on our population.

The Commonwealth Games are also an opportunity for a small CGA like New Zealand to contribute and lead.

We are hugely supportive of GOLDOC’s Reconciliation Action Plan recognizing the First Nations people of the Gold Coast. We are also proud of the steps we’re taking here in New Zealand towards working with our tangatawhenua and recognizing New Zealand’s unique bi-cultural status.

Through the Queen’s Baton Relay we were able to connect with the Yugambeh people and share the progress we have made in incorporating our first nations culture and traditions into our organisation and sporting landscape.

The formal handover of the Queen’s Baton to the Yugambeh people in Auckland was a highlight of the relay.

We’ve also conducted research into gender balance in sports media and, through our Commonwealth Games family, have been able to share this and support the equal portrayal of female athletes through sport.

As we approach an “almost” home games, we’re asked if New Zealand, too, could host a Commonwealth Games. It’s a complex question with significant financial implications for a small country. But what we do know is that the Commonwealth Games are held in New Zealand with great affection.

Much of this fondness can be traced back to the times we’ve hosted the Games – in 1950, 1974 and 1990. These events are milestones in our nation’s history and have helped shape our culture and identity.

As a CGA, we can open the door to a conversation that could have a real and positive impact on the citizens of New Zealand.

We may be a small nation in the Pacific, but through the Commonwealth Games and wider Movement, we feel connected. We know that these connections enable us to shape our own culture, identity and self-image.

They provide us with the stories, legacy and shared history we take pride in, and give us opportunities to develop and share our ambitions, values and learnings.

We are hugely looking forward to the Gold Coast 2018 Commonwealth Games, and their role in creating one more chapter in our shared Commonwealth history.

We wish each and every one of the athletes and support team members representing the 71 nations and territories of the Commonwealth Games the very best for Gold Coast 2018. We see each other as friends – as well as sporting rivals – and know we are going to have a fantastic two weeks together.