Barshim, 26, was one of the most consistent and dominant athletes of the year. Starting with a 2.35m leap in Jeddah in April and ending with a 2.40m jump in Eberstadt in August, Barshim pieced together an undefeated season across 11 competitions. 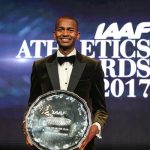 He won the world title in impressive fashion, clearing all of his heights up to his winning mark of 2.35m on his first attempt. One week after his triumph in London, he jumped a world-leading 2.40m in Birmingham and followed it four days later with a winning jump of 2.36m in Zurich to secure the IAAF Diamond League title.

Barshim ended the 2017 season with nine of the best 11 jumps in the world this year, capped by his two 2.40m leaps. He is the first high jumper in history to leap 2.40m or higher in five successive years. 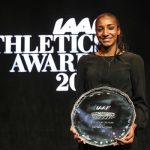 Two months later, the 23-year-old climbed to third on the world heptathlon all-time list after winning at the IAAF Combined Events Challenge meeting in Gotzis with 7013 points, producing a series that included a 1.98m high jump and a 59.32m javelin throw.

At the World Championships in London, Thiam lived up to expectation in all seven disciplines and earned the title with a score of 6784.

“Tonight is our time to celebrate,” Seb Coe said. “We have recognised the achievements and remarkable careers of some outstanding athletes, coaches and officials. With more than 50 champions, record breakers, ambassadors and coaches here tonight it’s impossible to individually honour everyone – I wish we could.

“We celebrate your amazing contributions to a phenomenal year of athletics. I’m particularly excited by the young generation of talent which so dramatically came of age on the world stage in 2017.

“Athletics looks forward to a strong and exciting future safe in your hands.”

Following an illustrious junior career, during which he spent most of his time focused on the combined events, 2017 was the first season in which Warholm dedicated himself completely to the 400m hurdles.

The Norwegian doubled up at the European Under-23 Championships in the 400m hurdles and 400m, where he won gold and silver respectively. But his biggest achievement came at the IAAF World Championships in London where he became the youngest ever world champion in the event.

Continuing on from her fine year in 2016, Rojas took her triple jump prowess further to emerge victorious at this year’s IAAF World Championships.

Widely considered one of the greatest sprinters of all-time, Bolt is a three-time 100m and 200m Olympic champion who collected 11 world titles over an international career that began when he was in his late teens. Bolt, 31, won four world 200m titles, three at 100m, and holds the world record over both distances, 9.58 at 100m and 19.19 at 200m.

The Jamaican retired this season after taking 100m bronze at the World Championships in London to end his career as one of the most recognised athletes in the world.

This award recognises and honours great service to athletics.

The Namibian coach is best known for guiding Wayde van Neikerk to the 2015 and 2017 world 400m titles and the 2016 Olympic gold medal where the South African broke the world record with a sensational 43.03 run.

A former athlete who competed in the sprints and long jump, Botha, better known as Tannie Ans, began her career as a coach in the late 1960s, first by guiding her children and later by identifying and developing regional talent. She has been the head coach at the University of the Free State since 1990.

Alexander has been involved in athletics for more than 30 years, playing key roles in helping deliver major events in the UK.

Alexander served as managing director for the IAAF World Championships London 2017. She currently serves as head of international and televised events at UK Athletics.

This award recognises outstanding achievements and contributions made to develop, encourage and strengthen the participation of women and girls at all levels of the sport.

ATHLETICS PHOTOGRAPH OF THE YEAR

Paul Sanwell’s image of Australia’s Sally Pearson in the semi-finals of the 100m hurdles at the IAAF World Championships London 2017. —- IAAF