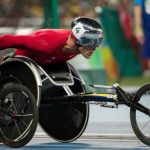 Hug clinched two gold and two silver medals at the Paralympic Games six months ago – placing him top of the medal standings in men’s Para athletics at Rio 2016.

Winner of the 800m and marathon T54, it was Hug’s first time at the top of the Paralympic podium – a feat he had been striving for since Athens 2004.

The 31-year-old believes the self-belief he built up over the course of the year was paramount to his success, so a strong performance in the UAE is just what he needs to kick-start another winning season with London 2017 on the horizon.

“For me it is very important to have a good start to the season. It’s important for my self-confidence,” explained Hug, who took a two and a half month break from Para athletics after he won the New York marathon last November.

The break was Hug’s longest-ever time away from the track and the roads, and just what he felt he needed after such a demanding season – although it wasn’t all about relaxing.

“I really had a lot to do, a lot of events to go to, a lot of awards ceremonies. So I was never bored. But it was good for me, and good for my body to have a long break and relax.

“I really appreciated all the awards, but it was also tough – it was a lot to do, and I was dressed in a suit a lot of the time!” added Hug, who now has his sights set on further success at July’s World Para Athletics Championships.

The Swiss also proved unbeatable on the roads last year, notching up an insurmountable lead in the Abbott Marathon World Majors series (which finishes in Boston, USA in April) with six wins out of six.

“When I won London (Great Britain) and Boston (USA) last spring it also gave me a lot of confidence, so it was a great start to build up my condition and my confidence on my way to Rio,” he explained.

Watanabe is amongst a strong field that will line up in Dubai – a fact not lost on Hug.

“It will definitely be interesting to see the young Japanese athletes; in Tokyo they were very strong, we definitely need to keep an eye on them. There will be good athletes there, especially from the Emirates and Tunisia as well.”

Hug may have been focussing on marathon racing in recent months – he also won October’s Chicago marathon, and September’s Berlin marathon – but he believes marathon and track racing can complement each other well.

“It’s always very difficult to find a balance, but for me it’s very good. I’m sure that they help each other, it’s an advantage especially in the marathons.

“Like last year, we had sprint finishes to so many of the marathons, so it helped that I was also a track athlete to be able to sprint at the end. And on the track, the endurance I get from marathon racing helps a lot.”

But he is not resting on his laurels: now Hug believes racing in Dubai will be like starting all over again.

“In a way I think winning in Rio changed my confidence. But I think now it starts from zero and I think the expectations are high again; very high.” —- IPC