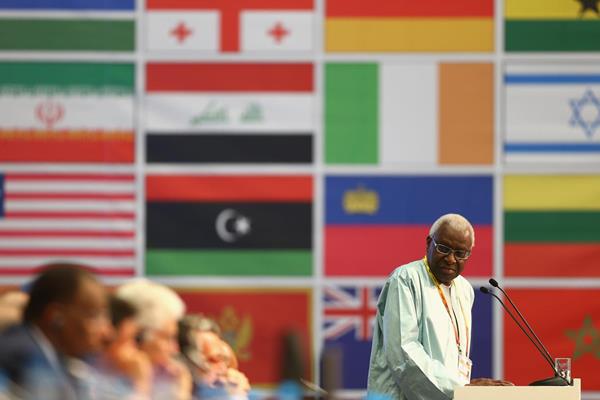 Moscow – Russia, August 8, 2013: The 49th edition of the IAAF Congress, the highest decision-making body of the association, met today at the Crowne Plaza at Moscow’s World Trade Center for the second and final session of its biennial two-day gathering ahead of the IAAF World Championships. During the Congress, the IAAF Council issued an anti-doping statement, which was approved by acclamation.

Delegates from 208 member federations were present at the Congress, which was presided over by IAAF President Lamine Diack

“Our two days of IAAF Congress was an absolute success,” said Diack at the post-congress press conference. “Yesterday we had a forum on a series of issues and the delegates were able to discuss many of the challenges and issues that face us. This morning it was the beginning of the Congress and we dealt a lot with the future of our sport, and the various actions necessary to ensure a good future for athletics.

“Russia has always distinguished itself in athletics with stars such as Svetlana Masterkova, Yelena Isinbayeva and Anna Chicherova,” he added. “This time we are looking forward to seeing a new generation and we eargerly await a successful 14th IAAF World Championships.”

“We have established an excellent relationship with the All Russia Athletics Federation and the city of Moscow, and since January we have worked very closely with each other,” said Bubka, who is also chairman of the Coordination Commission for the championships.

“We’re happy to hear positive feedback already from athletes and officials. The stadium is ready to present the championships to the world, informing them of the great achievements of track and field athletes.”

“Doping in sport is a very serious issue because it directly influences results and performances. It goes alongside violence, match-fixing and betting scams. But I can tell you that the work we’ve done in Russia over the past four years would take most other countries 10 years to accomplish.

“We have set up RUSADA and state-of-the-art laboratories as well as an educational programme. We have also approved new laws which will mean that people who encourage athletes to take drugs will be subject to criminal investigations, leading to sanctions and penalties.”

Diack presented 18 of the delegates with Veteran Pins, recognising their contribution to the global and national athletics movement, and seven IAAF Member Federations with the IAAF Sustainable Development Trophy (see lists below).

Decathlon (same order as men’s Decathlon) to replace the current Octathlon for Youth Boys to better provide for the transition of young male athletes in Combined Events.

Events for which World Records are Recognised

Among notable competition rule changes, which had already been approved by Council and were reported to Congress today, were:

An athlete may place padding around the box for additional protection during any of his trials. The placement of such equipment shall be done within the time allowed for the athlete’s trial and shall be removed by the athlete immediately after his trial is completed. At competitions under Rule 1.1 (a), (b), (c), (e) and (f) this shall be provided by the organisers.

All jumps shall be measured from the nearest break in the landing area made by any part of the body or anything that was attached to the body at the time it made a mark to the take-off line.

This is now a separate rule, not part of 251, Cross-Country Races.

Events for which World Records are Recognised

Women’s 4x1500m Relay added (in line with the introduction of the IAAF World Relays.) The best legal performance as at 31 Dec 2014 shall be the initial World record mark.