By Nicola Milan, – Doha, Qatar, May 4, 2018: The 2018 Doha Diamond League witnessed a scintillating evening of back-to-back action as the world’s best athletes delivered incredible performances across the board (Abderrahman Samba Mutaz Barshim). 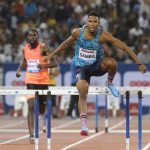 Team Qatar’s Abderrahman Samba and Mutaz Barshim stole the show as they stormed to victory in the 400m hurdles and high jump respectively and defended their Doha crowns, to the delight of the home crowd.

Samba continued his dazzling form so far in 2018 to wipe the field in the Men’s 400m hurdles smashing the Diamond League record, Doha meeting record and his own Qatar national record in the process, with a time of 47.57s. 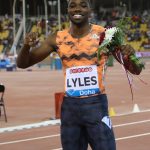 “I’ve defended my title – YES! I’m very happy for me and for Qatar. Winning at home is an amazing feeling, especially to break not only my record and the National Record, but the Diamond League record as well.

I have a feeling this will be a great season for me, and all I want to do is run even faster. The audience was so welcoming and I want to also thank everyone for being here today.”

The Qatari crowd continued their celebrations as Qatar’s sporting legend Mutaz Barshim lived up to expectation and created further sporting history as he cleared 2.40m for an incredible sixth consecutive season.

The 2017 IAAF World Athlete of the Year, World Champion and Diamond League Champion has not been beaten outdoors since 2016 and looked strong as he got his campaign to defend his IAAF Diamond League title off to a winning start.

Barshim attempted the meeting record of 2.42m but was not able to clear it on this occasion despite a valiant effort. Syria’s World bronze medallist Majd Eddin Ghazal finished second with 2.33m and Donald Thomas of the Bahamas finished third with 2.30m. Celebrating afterwards, Barshim said:

“My mother is here, she’s cheering for me. I’m really blessed. I made some mistakes, but very happy with the result and proud (Abderrahman Samba Mutaz Barshim).

I feel so great winning. I was not fit to succeed in all the jumps but still extremely happy at the end. I wanted to break a record today but still very ambitious for the rest of the season.

Being here was so many great Qatari athletes, such as Haroun and Samba is just amazing. It’s a testament to the fact that Qatar really has some great talent.”

Croatia’s Sandra Perkovic got the evening off to the perfect start by claiming a new Diamond League record of 71.38m in the discus. 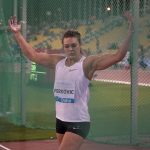 The two-time Olympic and two-time World Champion extended her own Diamond League record from 2016 and her 2013 Doha meeting record to show that she is on fire as she kicks off her campaign to win her third consecutive Diamond League Trophy. Speaking after the competition, Perkovic said:

“I was so close to my PB. I really think the Doha Diamond League is my lucky place, just as it was in 2015.

The environment here is amazing, and the conditions set me up for the year, with the season just beginning.

This is perfect as we look to competing in the European Championships this year, and Doha has made me ready to make my mark there.”

A further record was set shortly after as reigning Diamond League Champion and World silver medallist Steven Gardiner of the Bahamas broke the Doha meeting record and his own national record in the 400m with a time of 43.87s.

Team Qatar’s World bronze medallist Abdalleleh Haroun came second with a season’s best of 44.50s, showing that he is in fine form for the season ahead. Commenting afterwards, Haroun said:

“I’m proud of what I achieved tonight, but before even looking toward the World Record, I’m focussing on the IAAF World Athletics Championships in 2019 right here in Doha.

My biggest rival on the track is the world lead, who is currently not in for the season. Though I hope he has a speedy recovery, as his presence on the track motivates me even further.”

The fourth Doha meeting record of the evening came in the Men’s 200m as 2017 Diamond League winner Noah Lyles of the USA picked up where he left off last season with a time of 19.83s.

“The race was fun. We knew it was hot this morning, but surprisingly it was still hot in the evening. Right now, I just hope my performance stays the same.

I definitely don’t plan to stay ranked second; I want to step back into first place at the Diamond League. I’m working to fix some things in my performance and continue to get better.

For me, outdoor is easier and I need to keep my turns tight and set my mind ahead for the season.”

In the Women’s pole vault, 2018 World Indoor Champion, Sandi Morris of the USA cleared 4.84m to continue her strong start to the year and set the fifth and final Doha meeting record of the evening. She beat World, Olympic and Diamond League Champion, Katerina Stefanidi of Greece, who could only manage 4th with a jump of 4.64m.

Morris set the bar to 5:01 to attempt to break the Diamond League record but was unable to on this occasion. Speaking afterwards, Morris said:

“I’m so excited and happy to be here! I’m proud of my result and my new motto is: you’re not out until you miss out three times in a row! I jumped 4.84m today and I feel like I’m on a roll this year.

I sprained my ankle a tiny bit but I’m okay. My goals is, of course, 5.01m. I want to break the world record this year. You won’t break it unless you attempt it!”

It was a Germany clean-sweep with Andreas Hofmann throwing 90.08m to take third. Commenting on his victory, Röhler said:

“Today was great, but it wasn’t easy. There’s always room for improvement. My teammates and I travel together and train together, which motivates me always.

I’ve been preparing and knew I could throw that far. I was even able to take some risks today, and I know that I’m in good physical shape.”

The men’s 1500m race saw World Championships silver medallist Taresa Tolosa win in a season’s best of 3:35.07 ahead of Kenyan up and coming talented youngster, 17-year-old George Manangoi who set a new personal best of 3:35.53.

In 2015, the two created the greatest triple jump competition in history as they both jumped over 18 metres. This time, the distances were shorter with Pablo jumping a world-latest of 17.95 and Taylor jumping 17.81m.

Reigning world record holder Kendra Harrison of the USA held the competition at bay in the Women’s 100m hurdles as she swept to victory with a time of 12.53s.

Coming back for the 2018 season, 2016 Olympic Gold medallist Brianna McNeal finished second, six seconds behind in 12.58, and Sharika Nelvis came in third with 12.75s, making it an all-American top three. Speaking after the race, Harrison said:

“I’m grateful. I didn’t get the start that I wanted, but definitely got the final I wanted.

My aim for the season is to set another personal best, and I’m looking forward for tougher competition as well. I don’t doubt any of the other girls in the race, but I just need to focus on doing my best.”

The Men’s 800m saw a huge roar from the crowd, as a number of Kenyan fans were in the stands ready to support their national stars.

The cheering paid off as Emmanuel Kipkurui Korir crossed the line first, with fellow countrymen Elijah Motonei Manangoi and Nicholas Kiplangat Kipkoech in second and third.

The Kenyans had more to cheer for in the women’s 3000m as they took a clean sweep in a wave of personal bests to close out an evening of captivating competition.

World Champion and Olympic Silver medallist in the 3000m steeplechase Hyvin Kiyeng took third in a time of 8:30.51, also of Kenya.

You can catch up on all of the evening’s action on the Doha Diamond League social media channels and website.

Next year’s Doha Diamond League will move to Khalifa International Stadium ahead of the IAAF World Championships Doha 2019, giving the athletes a chance to test the venue ahead of one of the biggest competitions of their careers. —- https://doha.diamondleague.com/home/