France, June 23, 2013: Wales fly half Sam Davies has been named the IRB Junior Player of the Year 2013 following a thrilling IRB Junior World Championship final at Stade de la Rabine which his side lost 23-15 to England. Davies is the first Welshman to win the Award, and the first
Read More

France, June 23, 2013: After a thrilling final in north west France on Sunday, England are the 2013 IRB Junior World Champions. It was heartbreak for their opponents Wales, who led 15-3 until just before the hour mark, but failed to capitalise when England were reduced to 14 men for the first
Read More 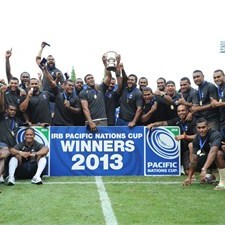 Tokyo – Japan, June 23, 2013: Fiji have been crowned IRB Pacific Nations Cup champions for the first time after defeating Tonga 34-21 in the winner-takes-all match in the concluding round of fixtures in Tokyo on Sunday. Fiji’s win means that there have now been three different winners in the last three
Read More

Dublin – Ireland, June 23, 2013: Russia men’s and women’s players promote Olympic Day in the Luzhniki Stadium, venue for the 1980 Olympics and for RWC Sevens 2013. Rugby has joined the global sporting family in celebrating Olympic Day and encouraging men, women and children to get up, get out and get
Read More

Dublin – Ireland, June 21, 2013: Rugby World Cup Limited Chairman Bernard Lapasset believes that RWC Sevens 2013 in Moscow will be a catalyst for the further development of the Game across Russia. With seven days to go until the finest men’s and women’s Sevens players on the planet take to the
Read More

Dublin – Ireland, June 19, 2013: Rugby World Cup Sevens 2013 will be out of this world in more ways than one. The tournament, which takes place from June 28-30 at the famous Luzhniki Stadium in Moscow, is set to deliver superb entertainment on and off the field, blending the best men’s
Read More

Dublin – Ireland, June 18, 2013: Japan 2019, Japan’s historic victory against Wales was not only a milestone for the national team, but it also proved a major step forward in re-igniting Japan’s passion for Rugby. The second Test 23-8 win over Wales in front of a 21,062 full house in Tokyo
Read More

Dublin – Ireland, June 12, 2013: The media accreditation application process for the final stages of the IRB Junior World Championship 2013 in France is now open. All working members of the media are invited to apply for accreditation by clicking on the link below and following the instructions. CLICK below TO
Read More

Dublin – Ireland, May 27, 2013: RWC 2019, Rugby World Cup 2019 tournament organisers Japan Rugby 2019 have today officially launched the process that will deliver the match venues that will be at the heart of a festival that will welcome and engage fans the length and breadth of Japan and around the
Read More