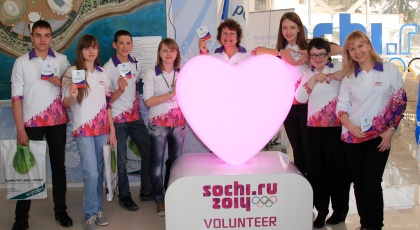 Sochi-April 18, 2012: Sochi 2014 has hosted a number of International Paralympic Committee (IPC) experts to educate Sochi 2014 volunteers on the best practices in communicating, interacting and supporting people with a disability, essentially given the necessity to help change attitudes in Russia to achieve the goal of fully integrating people with a disability into society (International Experts).

To enhance the lives of people with a disability, a large-scale program is being implemented in Sochi which will create a barrier-free environment of approximately two thousand buildings by 2014. While over five hundred buildings in Sochi have been made accessible for people with a disability, changing attitudes in society is the key to creating a truly barrier free environment in Sochi and throughout Russia.

A total of fifty volunteer training instructors, including students and teachers from the Sochi 2014 Volunteer Centers, have traveled to Sochi to participate in the educational program. They have undergone a two-day course of lessons run by experts representing the IPC and the IPC Academy. The instructors were all experts in their field: the IPC’s Head of Knowledge Management, Apostolos Rigas; the IPC accessibility expert, Mark Todd; the IPC Academy Director, Chris Solly and the IPC Academy of Sport’s Director of Brand and International Federations Relations, Michael Cary. They were supported by International Rugby Board (IRB) trainers Steve Griffiths and Mark Harrington.

The educational course was based on proven trainers’ educational methodology and used specific examples to deliver the most effective training. Participants had the opportunity to independently test different methods of the appropriate interaction with people with a disability.

The main recruitment criterion for the Paralympic Games volunteer trainers was a detailed understanding of the Paralympic theme and the willingness to continue their work after the Games. This continuity and contribution to the Volunteer Movement will become a key part of the Games Legacy.

One of the major stops for the team was Sochi, host of the 2014 Winter Games. At arrival the volunteer train was met by representatives of the Administration and residents of the city, including many Volunteer Movement companions. The volunteers visited the Museum of Sports Glory in the city of Sochi. In the museum, the volunteers were given the unique opportunity to touch the symbolic volunteer heart so that they could take some of its warmth home with them. These hearts had been “lit” at Krasnaya Polyana on February 7th, the launching day of the mass recruitment of volunteers.

“My role has been to provide the guys with a real demonstration of the great opportunities that Olympic sport opens to them. Volunteers will be at the very center of events, which means that their work will be hugely interesting and varied. And the task that lies ahead of them is truly important: to promote a healthy lifestyle”!

“We are not tired at all even after 10 days traveling! And every city we visited seemed to give us a fresh burst of energy. We told the guys what the Olympic Games are and explained that anyone can become a part of them”!

“After registering on the site, I received a letter by e-mail addressed to ‘candidate’- I knew then for certain that I would become a Sochi 2014 volunteer. Dreams come true, I am in the team! It is a fantastic feeling”.