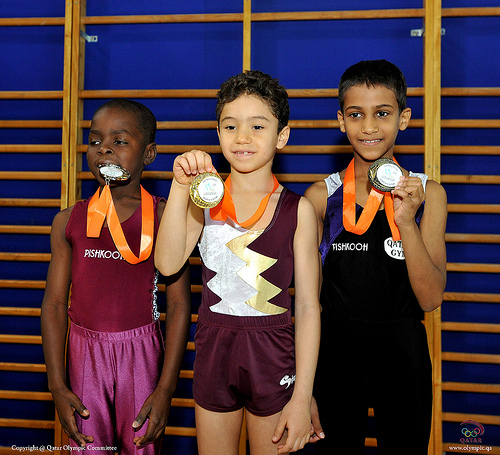 Doha, Qatar, March 21, 2012: The fifth edition of the Qatar Olympic Committee’s (QOC) Schools Olympic Program is entering the final stages of the competition at the Aspire Academy of Sports Excellence, in Doha. Qatar Schools

This year’s edition of the Schools Olympic Program has the theme ‘Sport and Family’ which sees school boys and girls aged five to 18 competing for medals in nine Olympic sports: Athletics, Volleyball, Basketball, Handball, Table-tennis, Fencing, Gymnastics, Swimming and Football.

The events are currently in the knock-out stage of the competition and the conclusion of the overall Program will take place on 6 April 2012 after a two day Finals Festival. The 2012 edition of the Schools Olympic Program has already been hailed a success as it has attracted over 19,000 participating young boys and girls, surpassing the record of 17,492 who were involved in 2011.

The Schools Olympic Program also features a ‘Special Day’, a unique event that offers students with special needs the opportunity to take part in a variety of different sporting events, including a number of Athletics sports and Table-tennis. The 2012 ‘Special Day’ will involve over 350 young athletes and will take place at the Qatar Sports Club on 21 March.

“Sport lies at the heart of Qatar’s national vision and the Schools Olympic Program is one of the exciting and engaging initiatives that we offer young people to help them lead healthy and fulfilling lives. Though the Program, not only do thousands of young athletes have the chance to use state-of-the-art sporting facilities and advance their sporting talent, but they will also learn important Olympic values such as fair play and respect, helping to build a positive community spirit.”

“Every year, it is wonderful to see so many young athletes take part and enjoy the Schools Olympic Program. Qatar wants to actively help children and young people be inspired to take up sport and pursue healthy lifestyle choices. With over 19,000 young participants in this year’s competition, the Schools Olympic Program is without doubt helping our nation realise this ambition.”

The Schools Olympic Program is a pioneer idea that was created by the Heir Apparent HH Sheikh Tamim Bin Hamad Al Thani, President of the QOC, with the aim to increase interest in Olympism amongst children in Qatar.

The Program balances sport, education, and culture, and intends to educate, engage and influence young athletes, motivating them to play an active role in the local community. The Program is also a platform for the QOC to identify and develop elite sporting talent, enabling young Qataris to have the opportunity to become future Olympic participants and Champions.

The Schools Olympic Program was launched in 2007 under the banner ‘Sport for Health’ with 7,099 students (boys and girls) representing 701 schools in the program. The 2012 Schools Olympic Program, with the theme of ‘Sport and Family’, will highlight the positive role that families can play in nurturing sporting talent and promoting healthy lifestyles. The Program includes a variety of promotional, educational and entertainment activities to help communicate this theme to the young participants.

The Schools Olympic Program is an annual initiative jointly organized by the Qatar Olympic Committee, the Supreme Education Council and the Qatar School Sports Federation which was founded in April 2010.