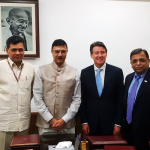 India, Oct 6, 2015: On the second day of a two-day visit (Mon 5 / Tue 6) to New Delhi, IAAF President Seb Coe signed an expression of intent with the Sports Authority of India, along with the Athletics Federation of India, for the establishment of a national centre of excellence for
Read More

Monaco, Dec 15, 2014: Following the recent news that the Rio 2016 Olympic Games will feature finals during the morning sessions of the athletics programme, the IAAF has today published the full timetable. “Staging finals in the morning was done at the request of the Rio 2016 Organising Committee and the Olympic
Read More
Monaco, Nov 11, 2014: The IAAF is delighted to announce the names of the 12 athletes who will compose this year’s induction into the IAAF Hall of Fame. Inaugurated in 2012 as part of the IAAF’s centenary celebrations, the IAAF Hall of Fame welcomed 24 athletes in its first year, followed by
Read More
Monaco – Oct 7, 2014: The IAAF is delighted to confirm that three cities have officially applied to be candidates to host the 2019 IAAF World Championships. Following Letters of Intent received earlier this year, formal Candidate Files have been submitted by the following IAAF Member Federations: Qatar, for the city of
Read More
Monaco, September 1, 2014: With less than two weeks to go until the IAAF Continental Cup, the teams are close to being finalised and many of the world’s best athletes are set to compete in Marrakech on 13-14 September. The European team is yet to be finalised, but it will feature Polish
Read More
Monaco, August 28, 2014: The Local Organising Committee of the IAAF World Championships, Beijing 2015 have published the 1st Official Bulletin concerning next year’s Championships. The IAAF World Championships, Beijing 2015 will be hosted in the National Stadium of the Chinese capital from the 22 to 30 August 2015. “The IAAF World
Read More
Monaco, July 8, 2014: Eugene’s Hayward Field last weekend hosted the US Junior Championships; the final event at the historic venue ahead of the 2014 IAAF World Junior Championships, which kick off in exactly two weeks from today. If the record-breaking results of last weekend are anything to go by, then Oregon
Read More
June 12, 2014: Nestlé Kids’ Athletics, Long before she became an Olympic champion or set 14 national records, Jenn Suhr remembers the first time she was asked to pole vault. “I was like, ‘Oh no way. I’m not doing that. You’ve got to be crazy to do that,”” laughed the 32-year-old London
Read More
Monaco, June 10, 2014: Jamaica’s 2011 World 100m champion Yohan Blake and USA’s 2000 Olympic 100m champion Maurice Greene are among the star athletes ‘past and present’ who will gather in the heart of New York City on Wednesday 11 June to support a demonstration of IAAF / Nestlé Kids’ Athletics. Blake,
Read More
Monaco, June 4, 2014: The International Association of Athletics Federations (IAAF) is delighted to announce that IAAF Kids’ Athletics | Nestlé Healthy Kids, the flagship development project of its School / Youth programme, will be demonstrated in the heart of New York City on Wednesday 11 June. IAAF / Nestlé Kids’ Athletics,
Read More