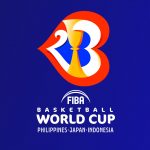 Mies, December 4, 2020: The official logo of the FIBA Basketball World Cup 2023 was unveiled on Friday as part of the launch of FIBA’s new #DontMissABeat campaign. The concept for the newly unveiled logo for the FIBA Basketball World Cup 2023 stems from three key elements: a heart, the Naismith Trophy
Read More
Munich, Feb 09, 2015: FIBA Europe has assigned Belarus as the hosts for this summer’s men’s and women’s 3×3 U18 European Championships. The events will take place in the country’s capital Minsk, between 21-23, August 2015. 16 teams will contest the men’s championship and the same number of teams will enter the women’s
Read More
Germany, Oct 14, 2014: The second annual FIBA Europe Mini-Basketball Convention and U14 Get Together is set to take place in Warsaw, Poland from 17-19 October, with the weekend also marking the first meeting of the FIBA Europe Youth Commission, term of office 2014-2018. Whilst the U14 Get Together has been an
Read More
Germany, August 06, 2014: FIBA Europe announced on Wednesday afternoon the pools for the inaugural 3×3 European Championships which take place from 5-7 September in Bucharest, Romania. Following three qualifying tournaments which took place across Europe in July and August, 16 Men’s and 16 Women’s teams will now compete for the European
Read More
Germany, August 01, 2014: FIBA Europe announced on Friday that it has received a record number of eight official bids from potential organisers of EuroBasket 2015. Bids from Croatia, Finland, France, Germany, Israel, Latvia, Poland and Turkey means this is the biggest number of formal applications to host a single EuroBasket event,
Read More
Munich, June 13, 2014: EuroBasket 2015, The Board of FIBA Europe has decided to relocate EuroBasket 2015 from Ukraine to a new destination, during its meeting in Munich, Germany on Friday. The decision was taken after a careful consideration of the continuous political situation and security issues in Ukraine, which are deemed
Read More
Munich, June 11, 2014: 2014 Youth Events, FIBA Europe announces that the media accreditation process for all 2014 European Youth Championships is now open. Media representatives wishing to cover the Division A events are required to complete the accreditation application online, using the FIBA Media Portal https://accreditation.fiba.com/fiba-publicregistration All required fields under the
Read More
Germany, May 23, 2014: Newly-elected FIBA Europe President Turgay Demirel, FIBA Secretary General Patrick Baumann and FIBA Europe Secretary General Kamil Novak are among the basketball notaries in Europe and beyond urging the worldwide basketball community to rally together in support of the grief-stricken communities of Bosnia and Herzegovina, Croatia and Serbia.
Read More
Munich, May 17, 2014: Turgay Demirel is the new President of FIBA Europe for the term of office 2014-2018, elected by the General Assembly of the member federations, in Munich, Germany, on Saturday. Demirel, 57, is a former Turkish international and the current President of his country’s Basketball Federation. He prevailed over
Read More
Munich, May 16, 2014: 47 FIBA Europe member federations met in Munich on Friday for the 2014 FIBA Europe General Assembly, where the late President Olafur Rafnsson was on the minds of all. Rafnsson, who passed away in June 2013, was remembered at the General Assembly by being named as an honorary
Read More