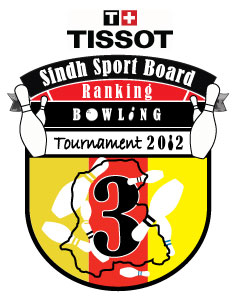 Karachi – Pakistan, July 14, 2012: Tissot SSB Inter Media Tournament is being organized by Sindh Tenpin Bowling Association (STBA) from 17th-18th July under the auspices of Sindh Sport Board and Pakistan Tenpin Bowling Federation PTBF playing rules and regulations shall apply. The tournament is continuation of 3rd SSB Ranking Bowling Tournament 2012 initiated by STBA which will be played under Singles Master, Single Amateur, Doubles and Inter Media categories

Over 20 Print & Media Teams will be participating in Tissot SSB Inter Media Tournament. “We have modified the ranking series by including media category in it in order to keep the journalist regularly involved for the better understanding of Tenpin Bowling in order to effectively promote the sports. This though provoking series has always proven its effectiveness in grooming the players’ skills”, said Romis Ali, General Secretary, STBA.

The time-frame for media category has been scheduled from 4-6pm on Tuesday 17th July and remaining categories will play later from 6:00pm onward both days.

STBA will be awarding players with prestigious awards, Tissot Watches, certificates and valuable Cash Prizes upto PKR 100,000 till 6th position in each category. STBA is the only legitimate body which is playing a vital role in promoting bowling and aiming to produce bowling stars to glorify Pakistan internationally. Numbers of new players have joined STBA which is the result of dynamic efforts made by the Association. —– STBA