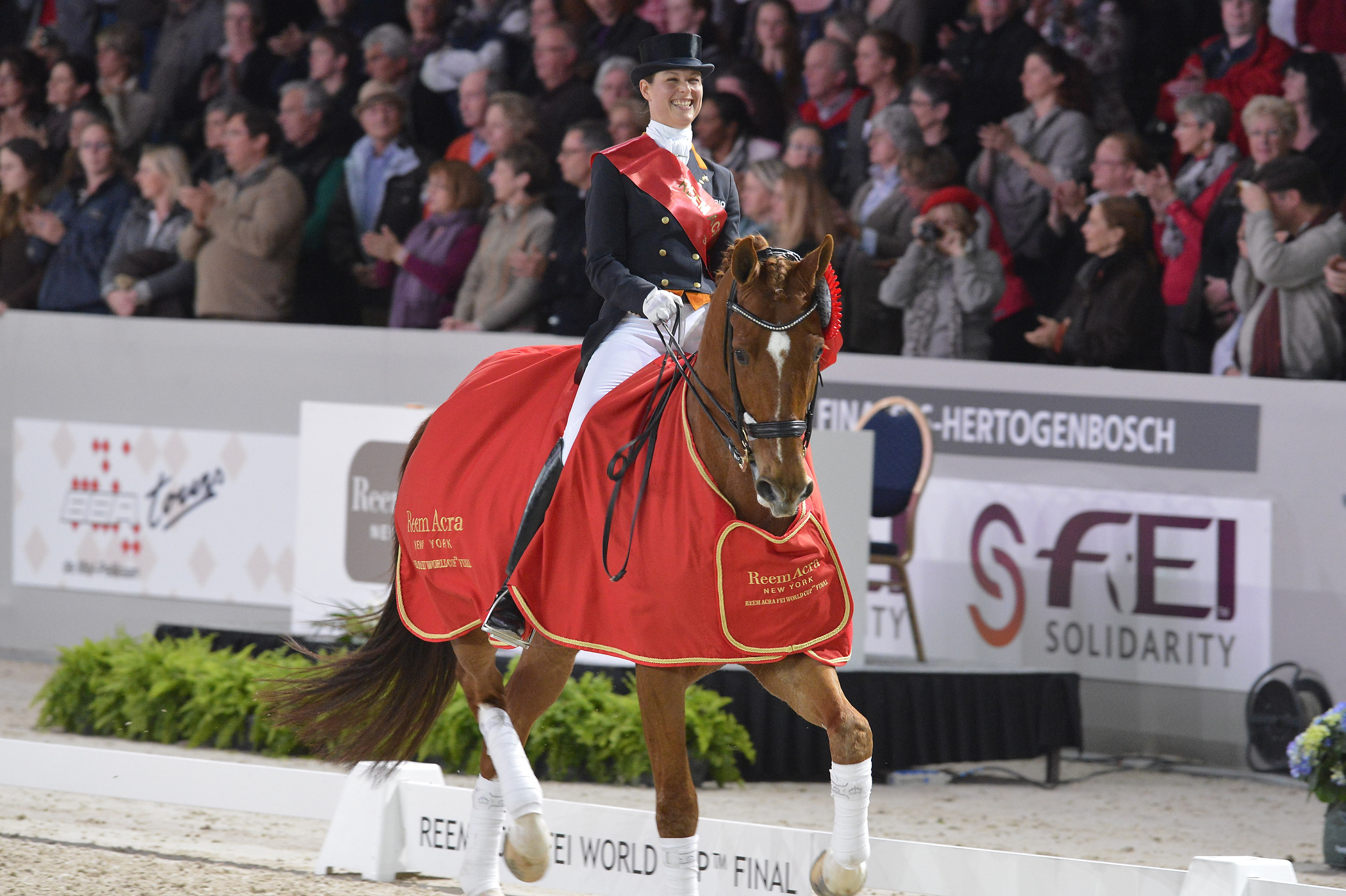 By Louise Parkes, Double-Dutch champions Adelinde Cornelissen and her great gelding Parzival will head up a star-studded field for the opening leg of the Reem Acra FEI World Cup™ Dressage 2012/2013 series at Odense, Denmark next weekend.

The collection of early points on the road to the series Final that will take place in Gothenburg, Sweden next April, is always desirable. And while defending champion Cornelissen needs only to show that both she and her bright-chestnut horse are in competitive form, the partnership that claimed individual silver at this summer’s London Olympic Games will surely be the ones to beat. They will face strong opposition, however, from some of the other big names of this sport which continues its development, and dramatic growth in popularity, with every passing year.

Helen Langehanenberg (GER) was runner-up at the 2011/2012 Reem Acra FEI World Cup™ Dressage Final in ‘s-Hertogenbosch, The Netherlands, last April. And Ground Jury President, Ghislain Fouarge, said that day that it was a very close call between the German rider who stood second and the winner, Cornelissen, whose degree of difficulty in the programme of movements selected for her Freestyle test gave her the advantage. Langehanenberg is also scheduled to line out at this weekend’s season-opener to the Reem Acra FEI World Cup™ Dressage series in which riders compete in a preliminary Grand Prix to decide the order of go for the following day’s Freestyle which stands alone in deciding the end result.

For many years the queen of Freestyle was The Netherlands’ Anky van Grunsven who, with nine wins in the FEI World Cup™ Dressage series over a 13-year period that began in 2008, holds an extraordinary and unchallenged record. The last of those victories was celebrated on home soil at ‘s-Hertogenbosch in 2008 with Salinero who went on to take Olympic gold later that summer. This summer, Salinero and Van Grunsven competed together for the very last time before the stallion was retired at the end of the London Olympic Games in Greenwich Park. And it was an emotional experience for the 42-year-old rider who, in yet another of her many record-breaking career moments, had collected her ninth Olympic medal two days earlier when part of the bronze-medal-winning Dutch team.

The Dutch remain a powerful force, the most recent of Cornelissen’s victories bringing their tally to 12 FEI World Cup™ Dressage titles since the first, achieved by Anne-Grethe Jensen and Marzog, at the inaugural final in ‘s-Hertogenbosch back in 1986. And many of the new wave of German riders have adapted with surprising ease to the latest demands of the judging experts who are still looking for power and expression in the horses, but equally balanced with lightness, freedom of movement and a softer carriage.

None have demonstrated these attributes better than the British, who have been in sparkling form since rising to new heights at the FEI European Dressage Championships in Rotterdam (NED) last year. Their star performers didn’t take on Cornelissen at the Reem Acra FEI World Cup™ Dressage Final last April, but with record-breaking achievements of their own they arrived in London for the Olympic Games full of hope and determination, and they swept almost all before them.

When the 2012/2012 Reem Acra FEI World Cup™ Dressage series arrives in the British capital city in December for the fifth of the eight qualifying rounds in the Western European League season, there will be explosive excitement if new Olympic individual champion, Charlotte Dujardin, and her gold-medal-winning British team-mates Carl Hester and Laura Bechtolsheimer are in action. At 26 years of age, Dujardin demonstrates the key elements of softness and forward riding the judges are looking for, raising the bar for everyone else. She took over the No. 1 spot in the World Rankings last month from Cornelissen, who currently lies second ahead of Langehanenberg in third.

Before all that however the new Western European season will follow the opener at Odense with legs at Lyon in France, Stuttgart in Germany and Stockholm in Sweden. After the Olympia Christmas show in London there will be just three further chances to make the cut to the final – in Amsterdam, The Netherlands, Neumunster in Germany and ‘s-Hertogenbosch, The Netherlands.

Also vying for a place in Gothenburg next spring are competitors from the Central European, North American and Asian/Pacific Leagues. Such is the spread of this sport, and the expertise of those competing in it, that riders from as far afield as Australia have travelled their horses right across the globe to take their place amongst the stars.

Danish Olympians Nathalie zu Sayn-Wittgenstein and Anna Kasprzaks will be amongst those flying the host-nation flag next weekend, while last year’s Odense winners, Hans-Peter Minderhoud and Tango, will make a welcome return along with Dutch counterparts Edward Gal and Blue Hors Romanov.

It will be something of an Olympic reunion for many of the riders, including Swedish team members Tinne Vilhelmson, Minna Telde and Rose Mathisen.