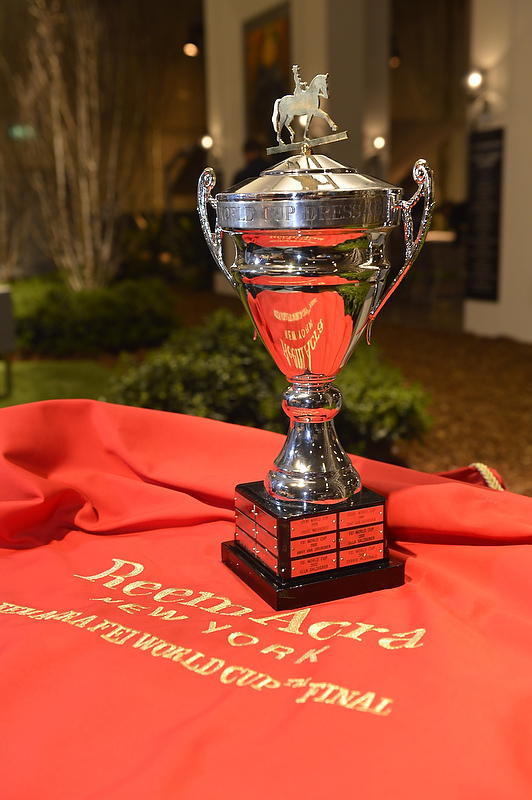 By Louise Parkes, April 19, 2012: The draw for the Grand Prix, the opening competition of the Reem Acra FEI World Cup™ Dressage 2011/2012 Final, took place at the Brabanthalle in ‘s-Hertogenbosch, The Netherlands, this afternoon. And Denmark’s Lone Jorgensen got an early surprise when pulling her own name out of the hat as first to go with FBW de Vito when the action gets underway tomorrow. However, although drawn in number two position, defending champion, Dutch rider Adelinde Cornelissen, must wait until tomorrow before she knows if she will start. Her 15 year old gelding, Jerich Parzival, was sent to the holding box during the first veterinary inspection today, and will be presented for re-examination in the morning.

The order-of-go for the Grand Prix is as follows:

You can also find it on this link – here: http://results.scgvisual.com/2012/denbosch/s32.html

The 2011/2012 Final is the 27th in the history of FEI World Cup™ Dressage, and the ninth to take place in ‘s-Hertogenbosch where Denmark’s Anne-Grethe Jensen won the inaugural title with Marzog in 1986. Great Britain’s Chris Bartle and Wily Trout lined up second, and Switzerland’s Christine Stuckelberger and Rubilit von Unk finished third that year.

Stuckelberger was victorious at the same venue two years later, this time partnering Gauguin de Lully, and then Germany’s Sven Rothenberger riding Andiamo, Isabell Werth with Fabienne, and Monica Theodorescu and Ganimedes claimed the top step of the podium at the Brabanthalle in 1998, 1990 and 1993. There was a four-year wait before the Final returned to the Dutch venue, and by then there was a new girl in town.

Anky van Grunsven and the great Bonfire had already claimed the honours in Los Angeles (USA) and Gothenburg (SWE) when stepping up to claim the trophy for the third consecutive season at ‘s-Hertogenbosch in 1997. And she won again at the revered home fixture in 2000 before Germany’s Ulla Salzgeber and Rusty recorded the second of their back-to-back successes at the Brabanthalle in 2002.

The Final was staged in Dusseldorf (GER), Amsterdam (NED) and twice in Las Vegas (USA) before Van Grunsven completed her sensational run of nine victories over a period of 13 years when taking the victory gallop with IPS Salinero at Den Bosch in 2008, while Edward Gal and Moorlands Totilas ensured the glory remained at home once again when heading the line-up the last time this event was held here in 2010. So of course Cornelissen is hoping that she will not only become the fifth rider in the history of the series to record a back-to-back double with the same horse, but to do so in front of her home crowd.

The Netherlands’ Ghislain Fouarge is President of the Ground Jury and will be joined by Susan Hoevenaars (AUS), Isabel Judet (FRA), Gary Rockwell (USA), Leif Tornblad (DEN), Katrina Wust (GER) and Foreign Judge Stephen Clarke (GBR) in deciding the result as the action gets underway tomorrow at 12.00 local time. Following the Grand Prix, the top 15 riders qualify for Saturday’s Freestyle to Music competition, at the end of which the coveted trophy will be awarded to the 2011/2012 Reem Acra FEI World Cup™ Dressage champion. Photo: FEI/Kit Houghton.