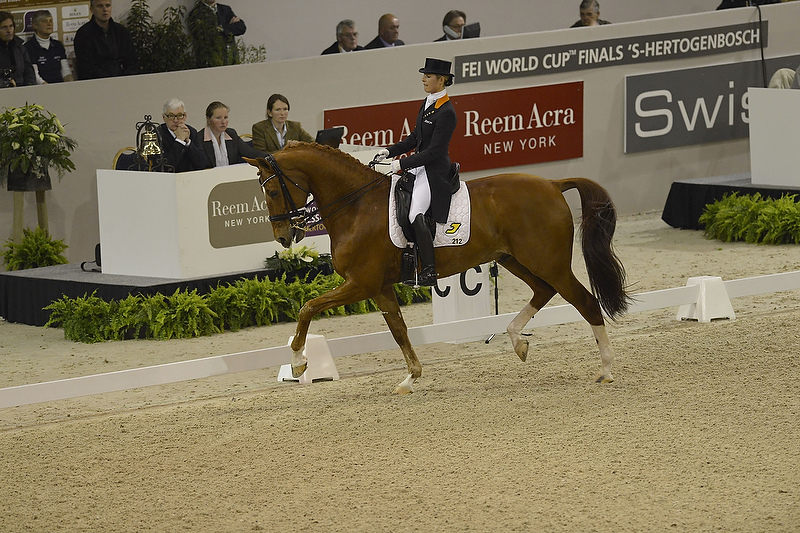 The defending champions, Adelinde Cornelissen and her mighty chestnut gelding Jerich Parzival, swept to victory in the Grand Prix at the Reem Acra FEI World Cup™ Dressage Final in ‘s-Hertogenbosch, The Netherlands this afternoon. And the 32-year-old Dutch rider was much relieved that she could live up to expectations on her home turf after a long and restless night.

Held over during the first horse inspection yesterday, Parzival passed with flying colours when re-inspected this morning and produced the winning score that pinned Germany’s Helen Langehanenberg and Damon Hill into second while Italy’s Valentina Truppa and Eremo Del Castegno finished third. But as Cornelissen admitted after heading the field, “it wasn’t the best preparation – and I could maybe have slept a few more hours last night!”

The morning was overshadowed by the tragic news that Dressage team coach, Holger Schmezer, who had travelled with the three German contenders to ‘s-Hertogenbosch, had passed away suddenly the previous evening. And the presentation ceremony was tinged with great sadness as the riders and spectators stood for a minute’s silence as a mark of respect.

At the post-competition press conference, Helen Langehanenberg explained that the she and her fellow-German competitors, Isabell Werth and Nadine Capellmann, sat together well into the night discussing whether they should withdraw from the Final under the circumstances. “It was really hard for everyone – completely unexpected. In the end it was our opinion that Holger would want us to ride – that was his aim, why he came here, so we had to do it for him,” she said.

First to go in today’s competition was Denmark’s Lone Joergensen who set a strong standard with a lovely performance from the light-moving FBW de Vito for a score of 71.337. Cornelissen and Parzival swept into the lead however, when next to go. The rider, who took two gold medals at last year’s FEI European Dressage Championships in Madrid (ESP), admitted afterwards that her horse may be a bit ring-rusty “because he only had two shows this winter”. As a result “Parzival maybe doesn’t have the rhythm of competition yet this year” she said, but she anticipates that “tomorrow he’s going to be even better!”.

Commenting on her performance she pointed out that “Parzival in all exercises doesn’t have any bad one, his passage and piaffe are always good”, but even this master of his trade can make a mistake now and again. Today he ground to a halt as they were executing the final movements down the centre line. “There is always background music, and today as we were doing the piaffe the music stopped, so he thought he was finished – I had to tell him, No! Not yet!” Cornelissen said, laughing. Despite that blip, the pair posted a score of 78.024, and it would not be beaten.

Germany’s Isabell Werth was third into the arena and there was a buzz of excitement as her 11-year-old gelding, El Santo NRW, registered high scores in the early stages of his test. But, following a big spook toward the end of the extended canter, the scores began to deteriorate and this partnership completed with 69.802, which was only good enough for 10th in the final analysis.

Fellow-German respresentatives, Langehanenberg and Damon Hill, rose to the occasion however to produce a charming programme. “I was really happy with him!” the rider said of her handsome stallion. “He was brilliant at the start – he did lovely piaffe and passage, but sadly at the end there was a mistake, but he is so motivated and willing!” she said. “I was so sorry for the mistake, but we are two living beings, and it is what it is!” she added. And her score of 76.125 would prove plenty good enough for runner-up spot.

Valentina Truppa was surprised to find herself in third. “I didn’t expect to be in the top three,” she said. “My horse was really good and very concentrated – he’s not usually at his best indoors!”, she pointed out after racking up 75.106 to place herself well ahead of The Netherlands’ Hans Peter Minderhoud and Glock’s Tango in fourth.

Great Britain’s Richard Davison finished fifth following yet another classic display of professional riding. He steered Hiscox Artemis through his movements with a veteran’s touch to put 73.374 on the scoreboard, while Sweden’s Patrik Kittel claimed sixth place with Toy Story who showed some flashes of brilliance during his test.

America’s Jan Ebeling (Rafalca) and Shawna Harding (Come On III) undermined their chances by mis-timing their entry into the arena and were subsequently penalised with the deduction of all-important points. But all riders will compete again in tomorrow’s decisive Freestyle to Music which begins at 14.00 local time.

Australia’s Rachael Sanna and Jaybee Alabaster will lead the way, while the defending champions will start 15th of the 18 horse-and-rider combinations and will be a tough act for any of the others to beat.

This is the 10th FEI World Cup™ Dressage Final to be staged in ‘s-Hertogenbosch, which has also been the venue for two further FEI World Cup™ Jumping Finals.

18 horse-and-rider combinations started in today’s Grand Prix and all go through to tomorrow’s Reem Acra FEI World Cup™ Dressage Final Freestyle to Music competition which will decide the 2011/2012 champion.

Adelinde Cornelissen, when asked if she will be riding a new Freestyle programme tomorrow – “a lot of people are asking me about that – I’m working on a new one, but still riding my old one.”

Adelinde Cornelissen, talking about Jerich Parzival at yesterday’s first horse inspection – “I don’t know what happened. He was stupid and fighting during the vet check, but I got on him and he was fine. I wanted it (the re-inspection) to be done right away – it was a helluva night waiting last night but he passed this morning!”

Each FEI World Cup™ Dressage qualifier consists of a Grand Prix test, which in turn is a qualification for the Freestyle to music competition, where league points are accumulated towards places in the Final. The same format of Grand Prix and Freestyle is also used for the Final.

Judged on both technical and artistic merit, the FEI World Cup™ Dressage combines art, sport and partnership between horse and rider at the highest level and consistently proves a winning formula with audiences all over the world.