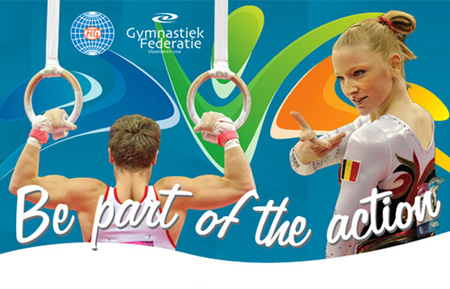 Lausanne, May 2, 2013: In 150 days’ time, on September 30, the 44th FIG Artistic Gymnastics World Championships will open in the Antwerps Sportpaleis in Belgium’s largest municipality, Antwerp. After the closing of provisional registrations, 540 gymnasts (340 men and 200 women) from 78 FIG member federations were registered for the event.

In the post-Olympic year the championships feature individual competitions only, including men’s and women’s Qualifications, All-around Finals and Apparatus Finals over a period of seven days. Each federation is entitled to register a maximum of six men’s and four women’s gymnasts, with no more than three gymnasts competing per apparatus.

Competition and training venues in Antwerp will be equipped with apparatus supplied by FIG partner Janssen-Fritsen, with a detailed list available on the FIG website.

Besides the competitions, two important events are on the agenda during these championships:

Election of the athletes’ representatives

On October 3 and 4 respectively, the WAG and MAG athletes’ representatives on the FIG Athletes’ Commission will be elected by the athletes’ assembly for the period extending from 2014 until 2017.

The first of a series of workshops to be presented at World Championships during this cycle will be held for coaches and judges on October 3 and 4 respectively. The purpose of these workshops, that are held in collaboration with FIG partner Cirque du Soleil, is to improve the artistic and musical presentation in women’s Gymnastics. —- FIG