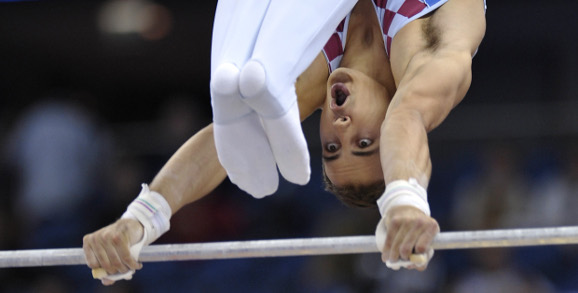 LAUSANNE (SUI), April 26, 2012: Some 160 Artistic gymnasts from 40 different nations are registered to participate in the Grand Prix Osijek 2012, a FIG Challenge Cup that begins Friday in Croatia’s fourth largest city.

Hosted by the Croatian Gymnastics Federation and organised by GD Osijek – Zito the competition will be held at Gradski vrt sports hall and equipped with apparatus supplied by long-term FIG partner Spieth. After successful editions in 2009, 2010 and 2011, this marks the fourth Artistic Gymnastics competition to be staged in Osijek under the FIG label. Using the Individual Apparatus format, the tournament consists of Qualifications and Apparatus Finals.

History of the Osijek – Žito Club

Gymnastics appeared in Croatia and Osijek relatively early on, but only as a light workout for German and Austrian soldiers stationed on the military base at Osijek. Pervo Društvo Gombalacah was formed on August 19, 1865 and is one of the oldest sports clubs in Croatia.

The foundations were laid for gymnastics in the city of Osijek at an official ceremony held on September 2 and with a “Request for Approval of the Rules of Pervoga Društva Gombalach”. Today, that request is an integral part of the club’s Statutes.

After nearly 20 years of inactivity, and due to the political circumstances of the time, December 6, 1896 will always be remembered as the day when Croatia’s first club was formed, with founders Dr Ante Pinterović and Adam pl. Reisner at the head. These were the founding blocks of what is now the leading sports club in Osijek, Gimnastičko društvo Osijek.

Today, Gimnastičko društvo Osijek-Žito is home to experienced coaches and skilled gymnasts, the result of many team members’ hard work.