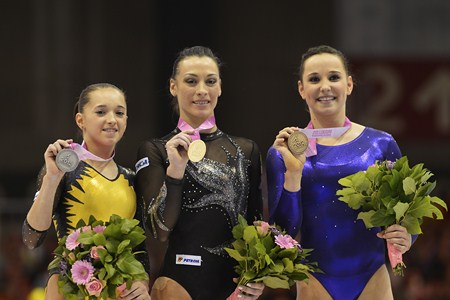 While Kanaeva defended her All-around title (116.400) and her titles on Ball and Hoop, Merkulova, who had won her first World Cup Gold on Clubs last year in Tashkent, prevailed on Clubs and Ribbon. The 2010 Youth Olympic Champion came second in the All-around (115.425), outscoring her compatriot Daria Dmitrieva (115.075) by a narrow margin. Dmitrieva had the highest score of the meet during Qualifications on Ribbon (29.500), but failed to do as well in the Final, where she placed second. She also collected a Bronze on Hoop. Kanaeva took the Silver on Clubs, but was unable to qualify for the Ribbon Final due to the two per country rule.

Belarusian Liubou Charkashyna garnered Silvers on Ball and Hoop as well as Bronze on Clubs and Ribbon, while Azerbaijan’s Aliya Garayeva went home with Bronze on Ball. With four fourth places and a sixth rank on Hoop, Bulgarian Silvia Miteva, remained at the foot of the podium this time around. France’s Delphine Ledoux qualified for all Finals, with her fifth place on Hoop being her best result.

The FIG Rhythmic Gymnastics World Cup Series continues on May 18 – 20 in Tashkent (UZB), the ultimate event prior to the 28th European Championships on May 30 – June 3 in Nizhny Novgorod (RUS).

First year senior Larisa Iordache led the Romanian Women’s Artistic Gymnastics senior team to the title at the 29th European Championships in Brussels (BEL) on Saturday. Romania outscored 2010 title holder Russia 176.288 to 175.536, while Italy took the Bronze with a 171.430 total.

With the top scores of Olympians Sandra Izbasa (15.200) and Catalina Ponor (15.433) on Vault and Balance Beam respectively as well as Iordache’s strong All-around performance (58.757) crowned by her leading Floor routine (15.033), Romania prevailed on all apparatus but Uneven Bars in this Team Final.

Italy impressed most on Balance Beam, where Carlotta Ferlito (14.900) notched the second highest score behind Ponor, and on Floor with former World Champion Vanessa Ferrari, scoring a 14.400. 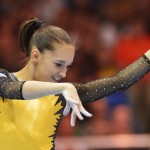 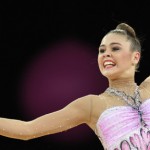 Romanian gymnasts continued to impress in the event Finals on Sunday, taking three out of the four titles and adding two Silver medals.

Sandra Izbasa, who qualified in second place behind Germany’s Oksana Chusovitina, outscored the latter in the Vault Final with a 14.883 total. Chusovitina, who will be celebrating her 37th birthday next month and has announced her retirement following the London 2012 Olympic Games, won Silver with 14.683 points. Giulia Steingruber (SUI) took the Bronze (14.624), confirming her qualifying rank.

Russia went one – two on Uneven Bars, with Victoria Komova (15.666) topping her leading result from the preliminaries and Anastasia Grishina taking the Silver with 15.200 points. Seventeen year old Nataliya Kononenko of Ukraine, who qualified in seventh place, improved to a score of 15.133 to take the Bronze. An unfortunate turn of events for France’s Youna Dufournet, who fell back to last place in the Final from an initial rank three in the preliminaries.

On Balance Beam and Floor, Ponor and Iordache won both Silver and Gold medals for Romania and Hannah Whelan made Great Britain proud by capturing the two Bronze.

Second in Qualifications, Ponor swiped the Beam title from top-qualifier Iordache (15.133), scoring 15.200 points. Whelan moved up to third from fifth place to claim Great Britain’s first-ever medal at a major championships on this piece.

On Floor, Iordache and Ponor confirmed their qualifying positions, improving their scores to 15.233 and 14.633 respectively. Whelan (14.533) outscored Vanessa Ferrari (ITA) for yet another Bronze from Brussels.

This year’s European Championships continue May 23-27 with the junior and senior Men’s event in Montpellier (FRA).