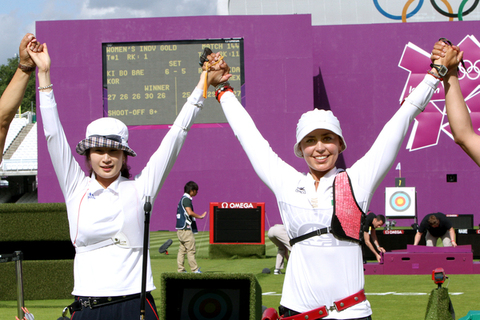 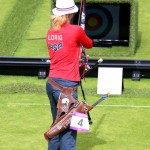 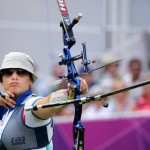 KI, the top seed and world No. 2, was pushed all the way by ROMAN. After drawing 5-5 across five sets, the Olympic title was decided one shot apiece. The Korean drew first and hit a disappointing 8 that crept high, but with 9 needed to complete a huge upset ROMAN’s arrow veered left and ended further out in the 8-ring.

ROMAN goes home with the silver medal and her teammate AVITIA won bronze after beating LORIG 6-2 in their match. The two young ladies, 24 and 18 years old, have written one of Mexican archery’s finest hours, as these are the first two archery Olympic medals for the country.

Korea’s women looked unbeatable when they won the team event on Sunday, but they could not carry that form into the individual event. LEE Sung Jin (KOR) was outclassed by AVITIA while a struggling CHOI Hyeonju (KOR) ran out of luck, losing on a shoot-off to Berengere SCHUH (FRA) after winning her two previous matches the same way.

There is something about the Olympic Games which brings out the best in LORIG. The 38-year old American, who won team bronze at Barcelona 1992 with the Unified Team (former USSR), was competing for her third country in her fifth Olympic Games (Unified Team, Georgia and USA).

Read the review of all women’s individual matches from the quarterfinals to the gold final.

In 1/8e elimination, 3-time Olympian and team European champion SCHUH defeated CHOI Hyeonju (KOR) after a tie-break. The Frenchwoman faces the 5-time Olympian and No. 4 seed LORIG in the first match of the afternoon for a place in semifinal. The American took the lead 2-0 after winning the first set 27-25. But she was caught up 2-2 when she scored 25 against 26 for her French opponent.

SCHUH shot a 5 on the right side of the target followed by two 7s on the left-hand side. It seems that the wind is very tricky again on the venue, doing twirls. She let the third set go and trailed 2-4.

Another 7 in the fourth set and the game was over for SCHUH. LORIG won the set 25-24 and the match 6-2. The American is thus still in the hunt for a second Olympic medal 20 years after she won team bronze for the Unified Team of the former Soviet Union in Barcelona 1992!

World No. 2 and ranking round No. 1 KI Bo Bae won a gold medal in the team event on Sunday and is aiming at a second Olympic title in these Games. PEROVA won the individual European Olympic qualifier in May to qualify for these Games. She is world No. 9 and seeded No. 9.

PEROVA shot a 10 at her first and third arrows of the following set, with a 7 at the second. KI scored 10 and 8, and she needed a 10 to win the set and take a 5-1 advantage. She released an 8 however, which offered the set to her opponent for a draw 3-3. The Korean took the lead again 5-3, shooting 28 points against 24 only for his opponent. In the final set, as the two ladies scored 9-9-9, KI won the one set point she was missing to clinch a difficult victory 6-4.

LIONETTI has improved on her team performance by beating the No. 3 seed and Youth Olympic Games silver medallist TAN in the previous round. ROMAN is part of a young, promising Mexican squad who have qualified two of their female members in quarterfinal. The Italian won the first set with all three arrows in the gold ring (28-27) and took the advantage 2-0. She could not do the same performance in the second (24), and with 26 points her opponent came back at 2-2.

Three perfect shots in the third set and AVITIA reversed the balance to her favour, 4-2. Her opponent was outshined in the fourth set with only 23 points, and the Mexican advanced to the semifinals, 6-2.

AVITIA hopes for a better result in the individual event, after missing out in quarterfinal in teams against the future bronze medallists, Japan. LEE was part of the successful Korean team on Sunday. She became the fourth Korean woman to win multiple gold medals in the women’s team event (2004 and 2012).

The Korean secured the first two set points (2-0) winning the first 2-arrow series 29-26. But with only 25 in the second set, LEE let her opponent tie the game 2-2, as AVITIA scored 27. Whereas LEE shot 10-10-9, AVITIA replied with three perfect shots and she was leading for the first time of the match (4-2).

The fourth set was stunning! The two competitors scored 10-9 each. Tension was funning at fever pitch! Since the Korean scored a 9 to end the set, AVITIA would come out as the winner with a 10… And she did with a perfect shot. The Mexican makes history, since she ensures the first ever archery Olympic medal to her country as she will face her teammate ROMAN in semifinal.

The Korean and the American are both looking for their first individual and second Olympic medal in total. Indeed, they have already one each in the team event, KI from the team event in London on Sunday and LORIG from the 1992 Olympics when she was shooting for the Unified Team of the former Soviet Union.

LORIG missed her chance in the third set when her opponent scored only 23. The American could not do more than tie the set and she trailed 2-4. KI clinched the final set and the match with a triple 9 (27-26). She will shoot for a second gold in London against one of the Mexicans.

The two teammates faced each other two times between 2010 and 2011, and they won one match each. They have already had Mexico’s finest hour since this semifinal encounter ensures at least an Olympic medal, the first in archery for their country.

After she upset the Korean LEE Sung Jin in quarterfinal, AVITIA had difficulties entering her semifinal. She scored only 21 points in the first set and let it go to her fellow countrywoman. She managed to tie the second and the third set however, 27-27 and 25-25, but still trailed 2-4.

ROMAN was only two set points away from the Olympic gold final. She scored 27 points for the second time of the match, which was enough to beat her teammate’s 24 points and win the match 6-4.

Just a few minutes after the disappointment of losing the semifinal match to her teammate Aida ROMAN, the Mexican AVITIA was back on the field to fight for the bronze medal.

She seemed to have recovered quickly and started with three perfect shots to take a 2-0 lead. AVITIA’s advantage increased to 4-0, after she won the second set 24-22, the two athletes appearing to face some difficulties due to a twirling wind.

The Mexican repeated 24 points in the third set, but this time LORIG seized the opportunity with 25 and came back at 2-4.

In the fourth set, the Mexican shot a bull’s eye right at her first arrow and the arrow hit the camera and bounced back. Maybe losing a bit concentration, LORIG followed with 8 and 6. As she had scored 8 and 9, her opponent needed an 8 to win the set and the match. She did it with a 9, offering a second medal to her country!

History had already been made, Mexico ensuring two medals after the bronze of Mariana AVITIA in the previous match.

Thanks to three arrows in the gold ring, the Mexican clinched the third set with 29 points and tied the game 3-3.

Korea’s team gold medallist replied with a perfect 3-arrow series to secure the fourth set and the lead again 5-3.

ROMAN followed with a triple 9 in the final set. As KI also scored two 9s, she needed a 9 to tie the set at least and clinched the one set point missing. She let an… 8 go, and shoot-off!

Shooting first, KI scored 8 only, but just out of the 9-ring. Pressure was strong on ROMAN’s shoulders… Gold was within her grasp, she just needed to touch the yellow ring… She took a long time to release her shoot-off arrow, which was an 8 also, but farther to the centre.