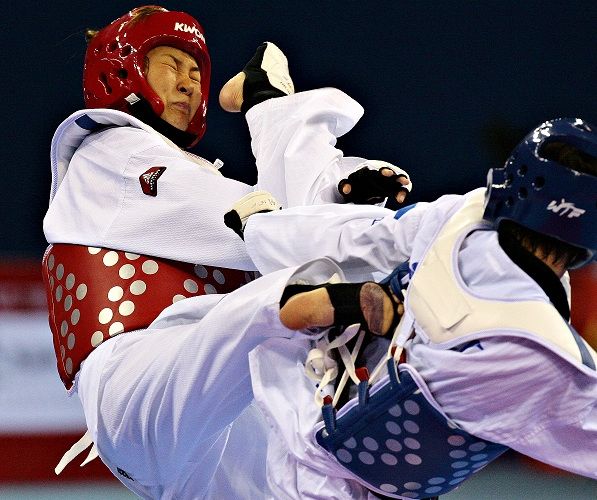 Germany won one gold medal, which was the country’s first gold medal ever at the WTF World Junior Taekwondo Championships. Iran, Turkey, Greece and Thailand grabbed one bronze medal each.

In the men’s -73kg category, Korea’s Jong-hun Won brushed aside a stiff challenge from Greece’s Apostolos Telikostoglou to won the final match 9-8 for the gold medal. The bronze went to Canada’s Erik Pec Gibski and Romania’s Zsolt Feher in the same weight division.

Iran and Russia clinched one gold medal and one bronze medal each on the third day of competition at the 9th World Junior Taekwondo Championships at the Sharm El Sheikh Covered Hall in Sharm El Sheikh, Egypt on April 6, 2012.

Azerbaijan and Korea won one gold medal each, while France, Germany, the United States and the Netherlands grabbed one silver medal each.

In the women’s -49kg category, Russia’s Anastasia Pankina managed to earn one point in the final seconds of the final match to earn her country the gold medal. The United States’ Cheyenne Lewis had to settle for the silver medal. Iran’s Atousa Zahrabiparvaresh and Cyprus’ Irene Pasiouli took home one bronze medal in the division each.

In the women’s -68kg division, Azerbaijan’s Farida Azizova brushed aside a stiff challenge from the Netherlands’ Aylin Akdeniz to win the final match 4-3 for the gold medal. Azizova is the only athlete competing at the ongoing World Junior Taekwondo Championships, who will compete in the taekwondo competition at the 2012 London Olympic Games. The bronze in the category went to Mexico’s Jacqueline Rose Galloway and Thailand’s Kanjana Sukeewas.