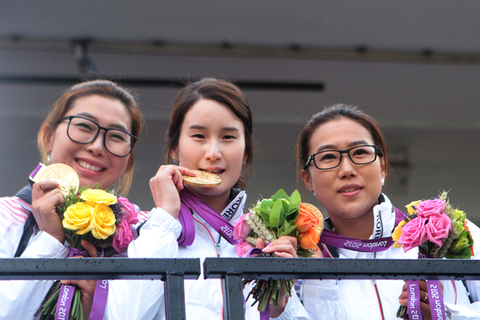 London – GBR, July 29, 2012: Korea once again showed they are invincible as a team as they took gold in the women’s event for the seventh successive time by beating China 210-209 at Lord’s Cricket Ground on Sunday. The Koreans have ruled this event since it was introduced at the Seoul 1988 Olympic Games. Despite questions over CHOI Hyeonju’s technique, the team still proved too powerful in conditions which veered from strong sunlight to heavy rain.

In the bronze medal match, Japan came back from a 4-point deficit at the halfway stage to beat Russia 209-207 in a match where the competitors had to cope with a low-flying pigeon across the field of play. It was Japan’s first women’s Olympic archery medal.

China ended Korea’s unbeaten run in the women’s individual event at Beijing 2008 and have been closing the gap ever since. They only finished 7th in the ranking round, which meant a first-round meeting with Italy.

The Italians could not emulate the men, who took gold on Saturday. A 3 from Pia LIONETTI (ITA) in the first end and a 4 by Jessica TOMASI (ITA) handed China an advantage they never surrendered, although Italy did make a fight of it by winning the final two ends. China emerged 200-199 winners.

China’s trio of CHENG Ming, FANG Yuting and XU Jing then beat USA 218-213, which set up a semifinal against Russia. They won that match 208-207 to set up a repeat of the women’s team final at Beijing 2008. Russia, who had earlier beaten Chinese Taipei and Great Britain, had to settle for 4th after losing the bronze medal match.

Korea had the two top scorers in the ranking round in KI Bo Bae and LEE Sung Jin but they were pushed all the way by China. In the final end, China shot first and scored three 9s. CHOI scored 8 in reply, leaving KI to shoot at least a 9 to win. KI did so.

Japan’s trio of Miki KANIE, Kaori KAWANAKA and Ren HAYAKAWA started strongly with a 207-192 win over Ukraine and a quarterfinal 219-209 victory over Mexico before coming up against Korea.

Mexico came into the Games in good form, having qualified at the World Cup in Ogden in June 2012. Aida ROMAN and Mariana AVITIA (MEX) started with two perfect arrows but they could not sustain it. Their downfall came in the third end when the Japanese scored 55 while they could only manage four 8s and one 9 in a 50 total. The 5-point gap went on to become 10 points.

Denmark was the surprise of the day, extending India’s disappointing Olympics by beating the world No. 2 ranked team 211-210. Their reward was a quarterfinal meeting with Korea. Not surprisingly, the No. 9 ranked Danish trio Carina CHRISTIANSEN, Louise LAURSEN and Maja JAGER lost 206-195.

It did not help that Korea shot their first end in still, dry conditions while Denmark stepped off the shooting line as heavy rain started to fall. A 56-46 score reflected the conditions.

The Great Britain team had the benefit of loud support from the home crowd but could not convert that into a win as they lost 215-208 to Russia in the first round.

Naomi FOLKARD, Alison WILLIAMSON and Amy OLIVER (GBR) were on level terms with Russia going into the final end. However, FOLKARD shot a 4 and admitted afterwards that she had no idea what happened. Russia’s Ksenia PEROVA, Inna STEPANOVA and Kristina TIMOFEEVA shot 56 out of a possible 60 in the final end.

Ukraine’s Lidiia SICHENIKOVA had an even worse moment after she was left with only three seconds to make her shot in the second end against Japan. SICHENIKOVA, forced to release under pressure and looking flustered, could only score a 3. Japan clinched the match 207-192 before the final arrow. —- World Archery Federation