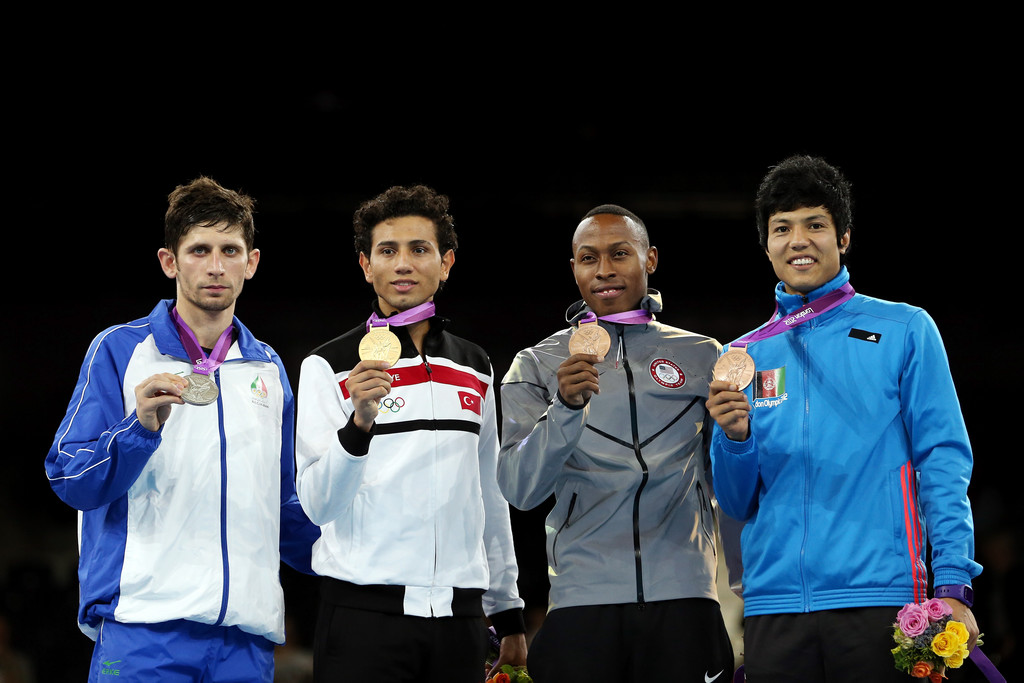 Jones, making history by capturing Great Britain’s first-ever gold in taekwondo in the Olympic Games, had no problem making her way to the finals. She won each of her matches with comfortable point margins just as she did to be crowned as the Olympic gold medal champion.

Jones took the lead in the last seconds of the second round of the match and kept her contender Hou Yuzhou from China at bay until she secured the win with a 6 to 4 victory. Hou kept up with Jones in the gold-medal final for most of the match, but time wasn’t enough for this talented athlete to finish what she started.

In the men’s -68kg competitions, Turkey’s Servet Tazegul wowed the crowd as he worked his way to the gold-medal match against Mohammad Bagheri Motamed of Iran to capture Turkey’s first-ever gold for taekwondo in the Olympics, as well. Tazegul’s gutsy performance of bold and dynamic maneuvers edged out Bagheri Motamed for the gold.

The bronze-medal matches really set the tone for the evening session. Each one built upon the excitement of the last and with each one ending in dramatic fashion. American Terrance Jennings and Rohullah Nikpah of Afghanistan won their bronze medals the hard way by fighting their ways back through repechage matches. Jennings took on Diogo Silva from Brazil in a powerfully dynamic match that he also won with a last second head kick to take the edge and claim the prize 8 to 5.

The history-making Nikpah edged out Great Britain’s Martin Stamper in one of the most dramatic matches of the night. Just as Jennings before him, he also come to the bronze-medal match by way of repechage and overcame host country favorite Stamper 5 to 3 to acquire Afghanistan’s only second medal in Olympic history. Nikpah won the first medal for his country at the Beijing 2008 Olympic Games in taekwondo. It was also a bronze. Marlene Harnois of France won her stunning match against Mayu Hammada of Japan with a thrilling last second head kick that put her up 12 to 8 to clinch her bronze medal.

Chinese Taipei’s Tseng Li-Cheng dominated Finland’s Suvi Mikkonen in the second women’s bronze-medal match winning by point gap 25 seconds into the third round with a score of 14 to 2.

For the war-torn Afghanistan, the medal was the second of its kind in its 76-year Olympic history in any sport. Mr. Nikpah, 24, earned his country a bronze medal in taekwondo at the 2008 Beijing Olympic Games, which was the first-ever Olympic medal for Afghanistan.

In a bronze-medal contest in the men’s -68kg division at the ExCel London, Mr. Nikpah, a bronze medalist at the 2011 World Taekwondo Championships, brushed aside a stiff challenge from host Great Britain’s Martin Stamper and won the match 5-3.

“I am so happy to win another Olympic medal. I have trained quite a lot for the gold medal,” said Mr. Nikpah shortly after the bronze-medal contest. “My thanks go to the Afghan people and my special thanks to my Korean coach Mr. Min Shin-hak.”

He said, “If another chance is given to me, I am willing to participate in the next Olympics for the gold medal. Taekwondo is the most popular sport in Afghanistan and as long as taekwondo maintains its Olympic status, Afghans, especially young people, can keep dreaming.” “Taekwondo is really giving hope and dreams to the world.”

Mr. Nikpah, who participated in the 2008 Beijing Olympic Games through a wild-card invitational ticket, grabbed a ticket to the 2012 London Olympic Games by winning the third place in the men’s -68kg category at the Asian Taekwondo Qualification Tournament in November 2011 in Bangkok, Thailand.

Mr. Nikpah, who underwent months of hard training in Korea prior to the opening of the London Olympic Games, said his achievement was made reality with a combination of support of the IOC Solidarity program and the continued efforts of the Afghanistan Taekwondo Federation. He was an Olympic Solidarity scholarship recipient.