London – GBR, July 30, 2012: A great day of judo came to an end in the EXCEL centre with Russia leading the medal table in the judo, after Mansur Isaev took Russia’s second gold medal in the -73kgs to add to Arsen Galstyan’s in the -60kgs

Meanwhile, Japan, finally took their first gold medal of the judo through Kaori Matsumoto in the -57kgs. After a terrible performance four years ago in Beijing, where Russia didn’t take a single medal, they now top the medal table here in London after three days of judo. It is remarkable to see how far Russia have progressed, and there is a realistic chance of them taking another gold medal by the end of the tournament and staying above the chasing pack. 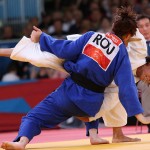 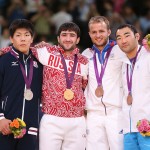 The favourites to top the table would certainly have been Japan, until yesterday that was, when after two days of judo they had still not taken a gold medal. Japan are undoubtedly stronger in the lighter categories than the heavier categories, and after the shock result of Tomoko Fukumi losing in the first day, having struggled to recover.

But finally on day three they found their saviour in Matsumoto, who fought off all the expectation of being clear favourite in the -57kgs and the weight of an entire nation on her shoulders, to come away with the one title she so desperately craved.

As a result Japan are close behind Russia with one gold medal and two silvers. Their second silver medal came through Riki Nakaya who lost out to Isaev in the -73kg final.

The men’s had drama from the very start of the day, when in his second contest world number one and favourite for gold Ki-chun Wang (KOR) snapped the ligaments in his arm. Wang was up against Rinat Ibragimov (KAZ) when he was caught in groundwork with a Juji-gatame armlock. The Korean refused to submit and as a result suffered bad injuries to his arm , including the ligament damage and ruptured muscles. He then escaped from the armlock and went onto win the contest.

Somehow in his next two preliminary contests Wang battled deep into Golden Score and through the pain barrier to beat both his opponents. But the final was just a bit too far for him as he went through a bruising encounter with the eventual gold medallist and number four seed Isaev.

Wang put his heart into the contest, but did not have his full range of techniques due to the limited ability in his right arm. Isaev took advantage fighting Wang on his weaker side and putting in strong attacks. A win on penalties was enough to end Wang’s Olympic gold medal dream.

The Korean then had one more encounter to try and salvage a medal in the bronze medal contest. But there he met France’s Ugo Legrand, the man who had stopped him in the 2011 World Championships. Legrand himself had won his first two contests, but then came unstuck against Dex Elmont in the quarter final, the number three seed from the Netherlands, which meant that he was demoted to the repechage final. After victory over Rasul Boqiev (TJK) he geared himself up for the biggest fight of his career as he faced up against the mighty Korean again.

Instead of blasting into the Korean, like he did at the World Championships, Legrand was patient and tactical with his judo, fighting the grips with Wang and keeping up a steady attack rate. This was the perfect strategy to employ against Wang, who couldn’t really compete in the grip-fighting because of his weak right arm.

Despite this Wang stayed in the contest and lived with Legrand all the way through to Golden Score. As the clock wound down Wang put in a couple of attacks; at one point almost scoring a decisive Yuko. But it wasn’t quite enough and deep into Golden Score Legrand pounced, throwing with O-guruma and scoring Waza-ari.

The other bronze medal came from Nyam-Ochir Sainjargal, who beat Dex Elmont, the number three seed from the Netherlands, to claim Mongolia’s first medal. Elmont had been unfortunate, having lost a close semi-final to Nakaya on a flag decision in the semi final. The epic contest against the Japanese fighter took it’s toll on Elmont who struggled in the closing stages of the bronze medal contest, and went down by two penalties to one.

In the final she defeated Romania’s Corina Caprioriu. Half-way through the contest Matsumoto attacked and the momentum put her Romanian opponent in real trouble. The only way Caprioriu could find a way out of the attack was by sweeping the front of Matsumoto’s leg and chopping her to the ground, which is an illegal action. After a review of the sweep, the referee’s rightfully disqualified Caprioriu, which handed victory and Olympic gold to Matsumoto.

Caprioriu can be proud of her day. Her silver medal doubled Romania’s medal total in the judo, after Alina Dumitru’s silver in the -48kgs.

Pavia, meanwhile, went on to win the bronze medal, defeating Hedvig Karakas of Hungary. Alongside Legrand’s result France now total three bronze medals. France themselves would have high expectations of finishing top of the medal table, with gold medal prospects Gevrise Emane (-63kg), Lucie Decosse (-70kg), Audrey Tcheumeo (-78kg) and Teddy Riner (+100kg) all yet to take to the tatami. The second of the female bronze medals went to Marti Malloy, who claimed USA’s first medal of the judo competition. Malloy was a surprise package, who upset the odds in several contests, including an incredible win over the number two seed Telma Monteiro of Portugal in her first fight. She lost out in the semi final to Caprioriu, who threw her with a huge Uranage to score Ippon. In the bronze medal contest she once again proved her calibre in the weight by throwing Quintavalle for Ippon with Ko-uchi-gari. 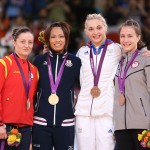 Number one seed Matsumoto Kaori went some way to settling the nerves of Japanese judo fans by taking the gold medal despite never really looking totally convincing. En route to the final Matsumoto defeated Vesna Dzukic SLO, before a golden score win against Kifayat Gasimova AZE by waza ari with de ashi barai. Matsumoto next faced reigning Olympic champion Giulia Quintavalle ITA in a quarter final where, with 30 seconds left, she executed a finely timed ko soto gari for a winning waza ari. Known on the international circuit as The Assassin, Matsumoto next had Automne Pavia FRA in her sites. However the Japanese found it difficult to hit the target and the contest was only settled in golden score, Matsumoto coming up with the winner. Marti Malloy USA was for many people the surprise package of the day in particular with her defeat of number two seed Portugal’s Telma Monterio.

The American then threw Yadinys Amaris COL with ippon seoi nage for ippon and narrowly squeezed past Irina Zabludina RUS on a hantei. Malloy was seven seconds away from going to golden score in her semi final with Corina Caprioriou ROM when she was thrown for ippon with ura nage sending the American into the bronze medal match. Caprioriou had earlier thrown Wang Hui CHN for ippon before gaining a hantei against Karakas Hedvig HUN in the quarter final. Caprioriou went into the final as the underdog and rarely put Matsumoto under any pressure. The Romanian was still in the hunt though until she carelessly and somewhat naively committed kawazugake in response to a Matsumoto attack and was given hansokumake. It was not the way that anyone would have wanted the final to be decided. But there was no denying the error and Matsumoto accepted the applause of the audience with as much delight as relief. Finally we had our first number one seed as winner and, more importantly for the Japanese, they had their first gold medal winner.

There were bronze medals for Automne Pavia FRA who defeated Karakas Hedvig HUN, and Marti Malloy who threw Giulia Quintavalle, Olympic champion from Beijing, with ko uchi gari for ippon and was the only unseeded player to ascend to podium today.

Russia’s Mansur Isaev will celebrate tonight his capture of the biggest prize in judo, an Olympic gold medal. It is no secret that Isaev’s inability to secure gold at senior European and world championship level had frustrated him in the past. But his win today in the final against Japan’s Naya Riki will have banished all previous disappointments. Isaev began slowly with a tactical battle against Spain’s Kiyoshi Uematsu that went to golden score and was settled on a single penalty. In his third round match the Russian wasted no time in disposing of junior Rustam Orujov AZE throwing him with nidan ko soto gake for ippon. Sanjargal Nyam-Ochir MGL was a more difficult proposition however, and in a tight and tense quarter final match Isaev finally came up with a te guruma for the winning score.

This brought about a mouth-watering contest between Isaev and world number one Wang Ki-Chun who’d suffered an elbow injury when almost armlocked in his second round match with Rinat Ibragimov KAZ. The Korean was clearly bothered by the injury yet managed to frustrate Isaev with a series of constant attacks. The Russian in turn was limited to attempting counters for the most part but his work rate was sufficient to keep things level in the contest. A single shido separated the pair at the end, Isaev coming out on top and taking his place in the final. It was a final in which Nakya almost lost his arm to Isaev, the Japanese narrowly twisting out of Isaev’s powerful attempt to apply jujigatame. It was Isaev’s uchi mata for yuko that was enough to bring him the title and Russia’s second gold medal in judo in these Games. There may yet be more to come.

There were bronze medals for Sanjargal Nyam-Ochir, whose defeat of Dex Elmont in the bronze medal match must have been sweet revenge for losing to the Dutchman in Tokyo in the world championships in 2010, and for Ugo Legrand FRA who, with French Premier looking on, defeated Wang Ki-Chun throwing the Korean with ashi Guruma.