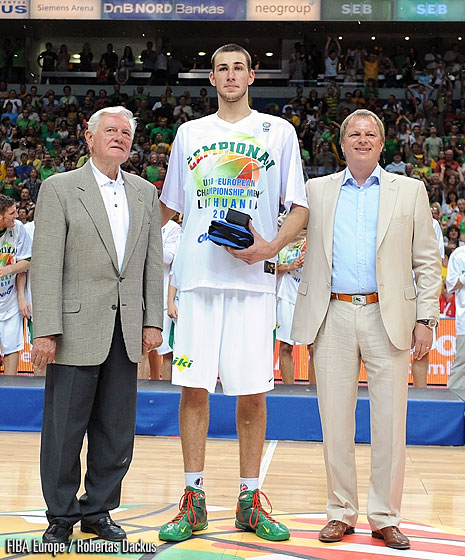 Germany, Feb 06, 2013: Valanciunas eclipsed other nominations in the field which was voted on by selected journalists and fans, easily seeing off Croatia’s Dario Saric and France’s Leo Westermann, who finished second and third respectively.

Following on from his breakthrough 2011 when the then 19-year-old led his country’s U19 team to gold at the World Championship; got drafted fifth overall by the Toronto Raptors in the NBA draft; and made his senior debut for Lithuania; 2012 could be considered something of a quieter year for the center.

That is, if you consider four club finals with Lithuanian club Lietuvos Rytas, an appearance at the Olympics and an NBA debut with the Raptors, as being quiet.

Opting to stay in Europe during the NBA lockout, Valanciunas made a seamless transition to becoming a regular starter in senior men’s basketball, being named as Eurocup rising star; earning a spot in the Lithuanian League All-Star Game; whilst also being announced as a member of the all-Eurocup squad.

The 20-year-old then capped his year off with a move to Toronto where he has been gaining regular minutes with the Raptors.

At the end of his NBA rookie season, Valanciunas can be expected to be seen back in Europe this summer as he begins his bid to help return Lithuania to the EuroBasket podium for the first time since 2007.

“Valanciunas winning the award for a second year running is the sign of a young man who continues to strive to become not just one of the best players in Europe, but in the world,” reflected FIBA Europe President Olafur Rafnsson.

“Despite Jonas already having collected a number of awards, I have a feeling that greater things are yet to come for him,” said FIBA Europe Secretary General Kamil Novak.