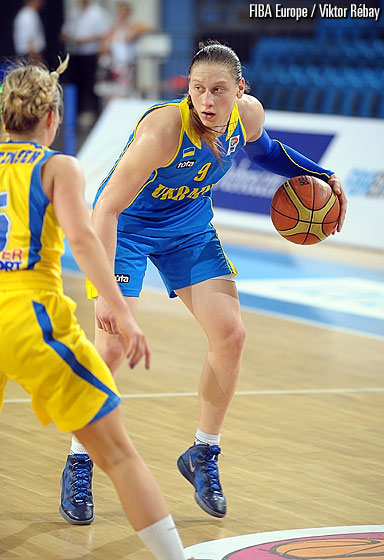 Germany, Feb 05, 2013: ALINA, In a combined vote between fans and selected media, the Ukrainian international was the clear-cut winner of the award, seeing off Sweden’s Farhiya Abdi and Spain’s Queralt Casas. Tuesday’s announcement offered the perfect early birthday gift for the youngster, who will celebrate her 21st birthday this Saturday.

The wing player began the 2012 summer by leading Ukraine to a spot at EuroBasket Women 2013, topping her team in scoring (14.3 points-a-night) and rebounding (6.3). Thriving from the experience of playing a key role for her senior national team, Iagupova then turned to the U20 arena, where her impact was even more notable.

Playing against her peers, Iagupova was in a league of her own, averaging 26.6 points, 10.1 rebounds, 5.1 assists and three steals a night to take the Ukranians to a deserved quarter-final appearance.

Iagupova’s impressive stats saw her leading the tournament in points-per-game and assists, whilst also finishing in the top five in the rebounds and steals categories.

With her time in the youth system now at an end, Iagupova will have only one focus come summer 2013: leading Ukraine to a top-eight finish in France.

“Alina has been one of the outstanding prospects in women’s basketball for the last couple of years and I’m sure with her determination she will make a name for herself in the senior game in the near future as well,” said FIBA Europe President Olafur Rafnsson.

“Congratulations to Alina on winning this award for the first time. Past players to have won this award have gone on to perform at the highest level in the senior game and I have no doubt that Alina will follow in their footsteps,” commented FIBA Europe Secretary General Kamil Novak.