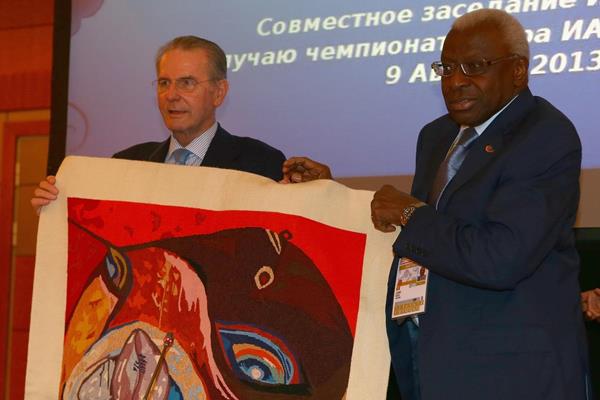 Moscow – Russia, August 9, 2013: The IAAF Council met with the Executive Board of the International Olympic Committee at the Radisson Royal Hotel in Moscow on Friday (9), ahead of the start of the IAAF World Championships on Saturday.

IAAF President Lamine Diack took the opportunity to say farewell in an official capacity to IOC President Jacques Rogge. Rogge is attending his last IAAF World Championships as IOC president, ahead of his retirement from this position in September.

To mark the occasion, Jacque Rogge was presented with a special tapestry that had been commissioned on behalf of the IAAF by Lamine Diack, and which was produced in the IAAF President’s home nation Senegal.

“On behalf of the IAAF, I want to thank you for all your support and say, ’Please don’t stay away.’ Stay in contact with us,” said Diack, who is also a member of the International Olympic Committee.

Concerning the joint meeting between the main decision-making bodies of the two organizations, Dr Rogge said: “The IAAF Council met with the Executive Board. We had a very good meeting, in a very good atmosphere. We had discussions of wide-ranging issues; of course, these were focused on the Olympic Games, but also on issues like doping.”

Dr Rogge praised the IAAF efforts in the fight against doping and supported the fact that IAAF will return to four-year sanctions for serious doping offences, starting on 1 January 2015.

”I think it is wise… and the IOC and IAAF have always used all the opportunities on the actual (WADA) code to get a four-year sanction when needed,” said Dr Rogge.