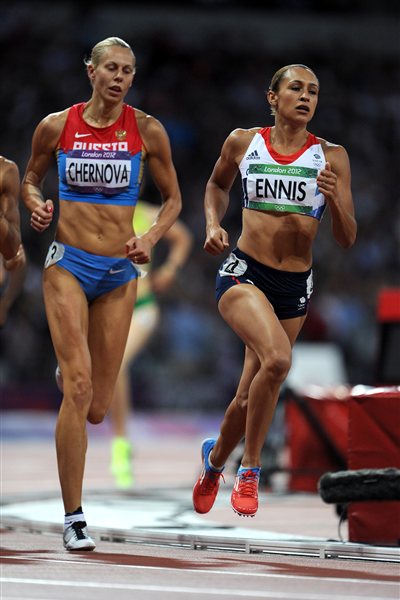 London – UK, August 04, 2012: The Sydney Olympics in 2000 is remembered for ‘Magic Monday’ – the day in which Cathy Freeman won 400m gold for the host nation Australia. In a similar vein, ‘Super Saturday’ of the London 2012 Games will long live in the memory as the day in which Britain won three gold medals – courtesy of Jessica Ennis, Greg Rutherford and Mo Farah.

Ennis – also known as ‘the face of the Games’ – had held the overnight lead in the Heptathlon with her best ever day-one score. She began the second day with a 6.48m leap in the Long Jump to finish just six centimeters behind Tatyana Chernova, keeping her big rival at bay.

But defending champion Nataliya Dobrynska was not so fortunate and she had two fouls followed by an aborted attempt, ending her Olympic campaign. The star of the javelin was Sofia Ifadidou of Greece, who threw 56.96m – the best ever mark within a heptathlon. She was pushed by Antoinette Nana Djimou Ida of France, who threw 55.87m in a group that saw seven women break 51 metres – incredible depth for a heptathlon.

On her final attempt, Ennis produced a PB of 47.49m to finish ahead of Chernova (46.29m), giving her an unassailable lead going into the final event. Ennis duly delivered in the 800m, sprinting away from her rivals to fittingly cross the line in pole position with a time of 2:08.65. It brought her points tally to 6955, breaking her own UK record she set earlier in the year and going to fifth on the world all-time list.

Germany’s Lilli Schwarzkopf was initially disqualified from the 800m having finished in the silver medal position, but she was later reinstated. Chernova, meanwhile, had to settle for the bronze medal with 6628. With 13 women over 6300 points, it was the greatest depth Heptathlon competition of all time.

Just minutes after Ennis crossed the finish line, the men’s Long Jump was reaching its climax. The marks were far from record-breaking, but the competition was extremely competitive. Rutherford took an early lead with 8.21m in round two, but that lead came under attack in the fourth round as Will Claye jumped 8.12m, Michel Torneus 8.11m and Sebastian Bayer 8.10m.

But Rutherford hit back with a leap of 8.31m to extend his lead. The only athlete who could respond was Australia’s Mitchell Watt, jumping 8.13m in the fifth round and 8.16m in the sixth. It was not enough to catch the leader, though, and Rutherford was crowned the champion.

The men’s 10,000m got underway as the Long Jump was coming to a close. In his usual style, Zersenay Tadese did the early pace-making duties, but it was not to last. With a few kilometres to go, world leader Wilson Kiprop stepped off the track, but the main protagonists were all still in contention. Bidan Karoki led for a few laps, followed by Kenyan team-mate Moses Masai. The whole time, Farah was keeping close contact, but so too was training partner Galen Rupp, defending champion Kenenisa Bekele and his brother Tariku Bekele.

With just 1000m of running left, Farah hit the front and wound up the pace – all too aware of the costly tactical mistakes that cost him the gold at last year’s World Championships. He bided his time before kicking hard on the last lap, but his pursuers were still not dropping back.

Farah moved into top gear into the home straight, where he was joined by Rupp who chased him all the way home. Farah crossed the line in 27:30.42 with Rupp less than half a second behind. For the third time this year, Tariku Bekele beat his brother to take the bronze ahead of Kenenisa Bekele, 27:31.43 to 27:42.44.

When Shelly-Ann Fraser-Pryce took 100m gold in Beijing four years ago, she was still something of a newcomer. Four years on, the Jamaican is no longer the underdog and came to London as the world leader. She lived up to expectations too and retained her Olympic 100m title, although she fought hard in the closing stages to hold her form against the might of World Champion Carmelita Jeter. Just three hundredths separated the pair in the end, but Fraser-Pryce came out on top in 10.75.

Veronica Campbell-Brown took bronze in 10.81 – the fastest ever time by a third-place finisher at any championships. American duo Tianna Madison and Allyson Felix set respective PBs of 10.85 and 10.89 as five women dipped under 10.9, reminiscent of the Olympic final from 20 years prior. With eighth-placer Blessing Okagbare running 11.01, it was the greatest-depth women’s 100m race in history.

The women’s Discus Throw was also of a great standard too, having witnessed a few down years recently. Two-time European champion Sandra Perkovic added to her ever-growing medal tally by taking gold with a national record of 69.11m. World leader Darya Pishchalnikova battled her way up the ranks throughout the competition. She was just fifth at half-way, then moved up to third with 66.42m before going into second with 67.56m in round five. World champion Li Yanfeng could not respond and took bronze with 67.22m – the first time since 1988 that three women had broken 67 metres at the Olympics.

Before today, China had never won a medal of any colour in a men’s race walking event at the Olympics, despite being one of the super powers of the event. Guatemala, meanwhile, had never won an Olympic medal in any sport. But today both of those records were broken in the men’s 20km Race Walk. A lead group of 12 athletes emerged in the second half, led by Chinese duo Wang Zhen and Chen Ding. Defending champion Valeriy Borchin was also with the lead pack and with two 2km laps to go he was one of six walkers still in contention.

But then came the drama as world bronze medallist Luis Fernando Lopez was disqualified, closely followed by world record-holder and world silver medallist Vladimir Kanaykin. Then in the final kilometre Borchin crashed to the ground in dramatic fashion, completely and utterly exhausted. He had to be stretchered off the course and taken away by an ambulance.

The medallists then became clear as Chen had made a big break and was way out in front. Barrondo gradually opened up a gap on Wang as he chased down Chen, but the 19-year-old’s lead was too big. Chen set an Olympic record of 1:18:46 to become the youngest ever Olympic medallist in a men’s race walking event. Barrondo, meanwhile, took silver for Guatemala in 1:18:57, also dipping inside the previous Olympic record, while Wang held on for bronze (1:19:25).

The men’s 100m at this Olympics could be one of the greatest ever as the four fastest men of all-time are set to clash in tomorrow’s final, and today all the big contenders safely made it through their heats.

The first three heats were won by Americans, while the next three were won by Jamaicans. Tyson Gay was first up, winning in 10.08, followed by Justin Gatlin in the second heat (9.97) and Ryan Bailey in the third heat, running a stunning 9.88 – the fastest ever time in an Olympic semi-final. And then it was the turn of Usain Bolt, who revealed little about his form as he won his heat in a moderate 10.09. Asafa Powell (10.04) and Yohan Blake (10.00) took the fifth and sixth heats, while Dwain Chambers won the seventh one in a season’s best of 10.02.

Perhaps one of the most shocking races of the evening session was the first semi-final of the men’s 400m hurdles. Felix Sanchez rolled back the years to run a world-leading 47.76 – his fastest time since winning the 2004 Olympic title in Athens. In a high-quality race that saw Jehue Gordon set a national record (47.96) and Kerron Clement clock a season’s best (48.12), World champion Dai Greene appeared to be out of it as he finished fourth in 48.19. But it proved to be the fastest of all the semis and Greene’s time was good enough to make it through to the final. Javier Culson won the second semi from Angelo Taylor, 47.93 to 47.95, while Michael Tinsley won the third (48.18).

The finalists were also decided in the women’s 400m. Defending champion Christine Ohuruogu closed well on 2009 World champion Sanya Richards-Ross in the first semi, 50.07 to 50.22, as Amantle Montsho and Francena McCorory were the top two in the second semi. The third and final semi was the fastest with three women – Antonina Krivoshapka, DeeDee Trotter and Novlene Williams-Mills – going sub-50.

Olympics over for Murer and Merritt

World champion Fabiana Murer was one of a handful of shock exits from the women’s Pole Vault competition. She failed to clear the 4.55m that was required to reach the final. So too did three-time Olympic finalist Monika Pyrek, Greek record-holder Nikoleta Kiriakopoulou and former World record-holder Svetlana Feofanova. But medal favourites Yelena Isinbayeva, Silke Spiegelburg and Jenn Suhr all safely progressed and will compete in Monday’s final. The injury that forced LaShawn Merritt to DNF at the Monaco Samsung Diamond League came back to haunt him and the defending Olympic champion only completed 100m of the track before pulling up.

He was the only shock exit though, as Jonathan Borlee stole the show with his 44.43 national record to win his heat. Brother Kevin Borlee, World champion Kirani James and World Junior champion Luguelin Santos were among the other heat winners, while double amputee Oscar Pistorius made history as the first track and field athlete to compete in both the Paralympics and the Olympic Games.

Ethiopia was out in force in the women’s 3000m Steeplechase as all three of their athletes – Etenesh Diro, Sofia Assefa and Hiwot Ayalew – impressed in qualifying. But World champion Yuliya Zaripova, World silver medallist Habiba Ghribi and African record-holder Milcah Chemos all looked good too. Defending Champion Gulnara Galkina scraped through as the 12th fastest overall. —- IAAF