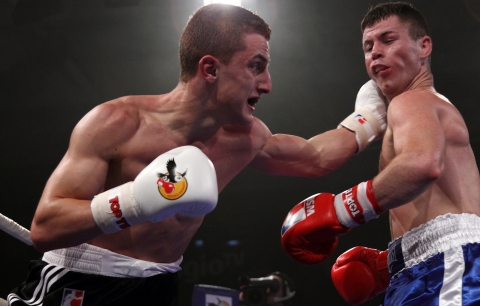 Lausanne – Switzerland, Dec 08: OUTCLASS, A packed EWS Arena in Göppingen was treated to a near-flawless performance by the German Eagles as they completely overwhelmed the visiting USA Knockouts in Group B. Gojan, Sopa, Michel and Pfeifer were the stars of the show on a night when everything went right.

The experience of German Eagles’ 29-year-old Veaceslav Gojan told in the evening’s opening contest, with the savvy Moldovan looking comfortable throughout the five rounds against American WSB debutant Shawn Simpson. Gojan moved well and used an excellent variety of punches to outsmart his young Bantamweight (50-54kg) rival, taking each of the rounds of each of the judges’ scorecards to give the Eagles to early lead in the match.

20-year-old Kastriot Sopa then impressed in his first WSB outing, with the Eagles’ orthodox fighter putting on a performance full of verve against the USA’s experienced Eric Fowler. The Lightweight (57-61kg) German was relishing taking to the ring in front of the fervent crowd. Sopa looked classy, picking his shots to perfection to stamp his authority on proceedings early on. He continued to grow in confidence as the fight progressed and looked convincing as he cruised to victory.

The Middleweight (68-73kg) bout was a short-lived affair with Xhek Paskali winning the contest by TKO after the USA Knockouts’ William Williams was severely cut over the right eye towards the end of the second round. With the American orthodox fighter unable to continue, the talented German 22-year-old was declared the winner and the home side had now an unassailable 3-0 lead in the tie.

It was the impressive Serge Michel up next, with the German Eagles Light Heavyweight (80-85kg) high on confidence after defeating 2011 Individual Champion Abdelhafid Benchabla in his previous outing. The 24-year-old orthodox German faced Swedish heavy-hitter Kennedy Katende in this one. The taller Michel boxed smartly against the slippery southpaw from the USA Knockouts, using his range and keeping his distance to draw his opponent in before unloading some sweet combinations. Some slick counter-punching followed in the latter stages which ensured the German orthodox claimed another win for his team.

The final bout of the evening saw 2011 AIBA World Championships bronze medallist Erik Pfeifer face the Knockouts’ 23-year-old Hungarian Istvan Bernath. These two powerful Heavyweights (91+kg) put on a great show with both going at each other right from the off. The German’s technique was at times sublime as his attacks found their target time and time again in rounds three and four. That deadly right hook of Pfeifer’s rocked Bernath several times and the German had the crowd up on their feet as he stormed his way to victory.

It was a resounding win for the home team, to the delight of the home crowd, but it will be much tougher next weekend when they travel to Earl’s Court in London to meet the British Lionhearts on Friday 14 December (Tickets are still available). USA Knockouts are also away to Ukraine Otamans that night. —- WSB