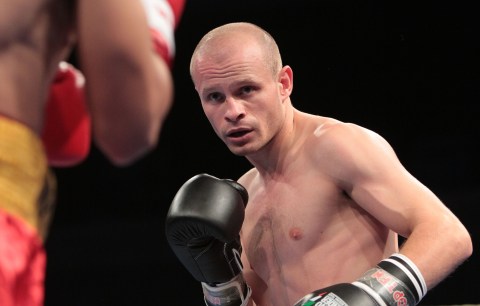 The match-up between old teammates Veaceslav Gojan and Vincenzo Picardi was first with the two Bantamweights (54kg) going toe-to-toe and it did not disappoint, delighting the crowds throughout with real attacking intent shown by both sides. The Eagles’ Gojan, who made the switch from the Thunder this summer, manage to soak up the early pressure from his opposite number to take control of the fight in the latter stages. It was hotly contested throughout the five rounds and there was almost nothing to separate the two. When the final result was announced, the crowd was stunned into silence as Gojan was awarded the victory after seemingly being in control in the final two rounds.

Filipino superstar Charly Suarez then battled German Eagles’ 22-year-old Robert Harutyunyan in the Lightweight (61kg) contest and the Italian’s team newest recruit lived up to his billing of an exciting talent with a performance full of verve against a taller opponent. Suarez dominated most of the exchanges and won by split decision to give Dolce & Gabbana Italia Thunder parity in the tie after the second fight.

Still basking in the glory of his exploits at the London 2012 Olympic Games, Vincenzo Mangiacapre then took to the ring and showcased real power in his long-awaited WSB debut against tough Moldovan Vasilii Belous. In the Middleweight (73kg) bout, the Italian 23-year-old looked comfortable from the onset, displaying his full repertoire of shots and a maturity in his tactics to record the win in style. The home team were now leading in the match for the first time, 2-1.

The fight between 2011 WSB Individual Light Heavyweight (85kg) Champion Abdelhafid Benchabla, who joined the Italian Franchise from Astana Arlans Kazakhstan during the summer, and the orthodox German fighter Serge Michel then went ahead. All eyes were on the home team’s latest addition with high expectations placed on Benchabla’s shoulders to deliver the goods this season. The Italia Thunder orthodox Algerian began sluggishly, leaving himself exposed, and in the second he was caught and had to take a standing eight count. From there, he struggled to get back into the fight and even though he finished strongly, Benchabla was ultimately defeated and the German Eagles were now back on level terms.

Dolce & Gabbana Italia Thunder Team Captain and undefeated Heavyweight (91+kg) king Clemente Russo, fresh from a second silver medal at the Olympic Games, then brought the show to a close when he went head-to-head with the much improved heavy-hitter Philipp Gruner. Russo, the undefeated and top ranked boxer for the past two seasons, demonstrated a canny ability to constantly find the weak spots of his opponent, gliding around the canvas to dictate proceedings throughout. The Italian 30-year-old was simply unstoppable, winning each round on each of the judges’ scorecards to give his team the win in their season opener.