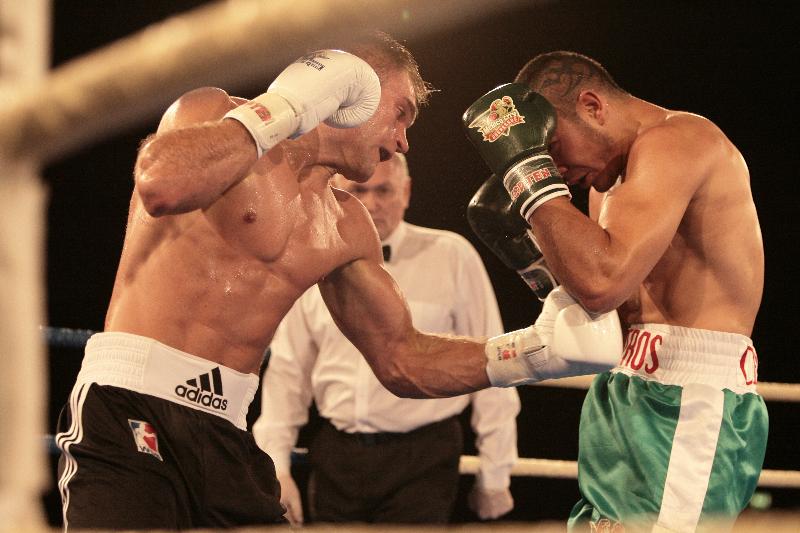 Lausanne, Nov 21: Following an encouraging display in Week I when they pushed the reigning champions all the way, a fearsome quintet of boxers will now be relishing the prospect of getting the German Eagles’ first win on the board against Ukraine Otamans this Friday 23 November (20:00 local time). A sensational line-up will be gracing the canvas for the home team in Group B with Youth Olympic Games gold medallist Artur Bril, undefeated power puncher Kevin Künzel and AIBA World Boxing Championships Baku 2011 bronze medallist all set to be involved.

31-year-old Frenchman Redouane Asloum, who joined the German Franchise earlier this month after making the switch from the pro ranks (9-1-1), will be making his World Series of Boxing (WSB) debut against the Otamans’ Aleksandr Riscan of Moldova in the night’s opening Bantamweight (50-54kg) contest. Asloum comes with a big reputation and will want to hit the ground running for his new team.

“I have been very well received by the team and the coach Valentin Silaghi is excellent”, declared Asloum. “I have fought in eleven pro fights but WSB is on another level, I am delighted to be able to show what I can do in this competition. Looking at the German Eagles boxers, I am confident that we can reach the WSB Team Final”.

Artur Bril of Germany found it tough replicating his success at the 2010 Youth Olympic Games into wins in the tough world of WSB. But with a full season now under his belt, the 20-year-old is primed to have a major impact on his team’s results in this campaign. He will be charged with taking down the threat posed by the Otamans’ Pavlo Ishchenko in the Lightweight (57-61kg) showdown. The orthodox Ukrainian won the AIBA European Olympic Qualifying Event in Turkey last May and they know each other well, so it will be a close fight.

The Middleweight (68-73kg) bout will see the German Eagles’ 22-year-old Xhek Paskali going head-to-head with Ukrainian southpaw Ivan Golub. These two fighters are newcomers to the competition but both are known for being attack-minded fighters so we can expect sparks to fly in this one.

Eagles big puncher, Kevin Künzel, who delighted fans with four victories in as many matches last season, will test himself versus 23-year-old orthodox Ukrainian Sergiy Lapin at Light Heavyweight (80-85kg). Künzel will have a big height and reach advantage over his opponent and, keen to give his team the victory, will look to use his explosive style to cause serious damage from the first bell.

The night will be brought to a close when German Heavyweight (91+kg) star Erik Pfeifer faces the Otamans’ Anatolii Antoniuk in the battle of the big boys. Pfeiffer is a pedigree fighter with some vicious hooks in his arsenal whilst his Ukrainian opponent is a solid counter-puncher, so this one promises to be a real battle of wits. Making his WSB bow, Pfeifer has been training extra hard to ensure he can lead by example and send the local fans home happy knowing the team has maximum points in the bag.

Earlier this week, the 25-year-old German told us, “As soon as I knew who I was boxing, I went to check him out on YouTube and from what I saw, I am confident he will be unable to cope with my unrelenting style”. “We have a great team and the set-up is ultra-professional, it feels great to be a part of it, I know we can go far in this fantastic competition”.

The state of the art facilities at the Kuppelsaal Congress Centrum in Hannover will host this event and with all tickets sold out, the atmosphere is sure to make the hairs on the back of your neck stand up. —- WSB