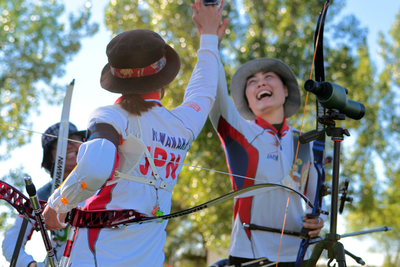 June 25, 2012: Here are the last teams who qualified. On the men’s side India, Japan and Chinese Taipei. On the women’s side the USA, Mexico and Japan! Here is their way to London! On Friday, the last individual qualifications will take place.

This Thursday afternoon was the very last chance to qualify a full team for the Olympic Games. There were three men’s and three women’s spots available!

Australia – Chinese Taipei on the men’s side and Georgia – Japan on the women’s side will battle now for the last Olympic spot!

On the women’s side, Georgia defeated France in a shoot-off! The match was tied at 210-210. In the shoot-off France scored 10-10-8, while Georgia had 10-10-9! USA had a good lead against Belarus and although the Belarusians came back strong in the last end, the USA prevailed 212-210. Mexico and Japan also joined the semifinals. Three out of these four teams will qualify for the Olympic Games!

In the shoot off Mexico started with 9-10 and USA started with an 8-9. The final arrow for USA once again shot by NICHOLS was 10. Mexico’s final arrow was an 8 that meant the judges would measure to see which 10 was closer to centre. After measurement it was determined USA’s arrow was closest to centre.

Tomorrow the final individual Olympic qualifier will take place. There will be seven spots for the men available and eight for the women. They will be contested by 80 men (from 35 countries) and 50 women (from 25 countries). —- WA