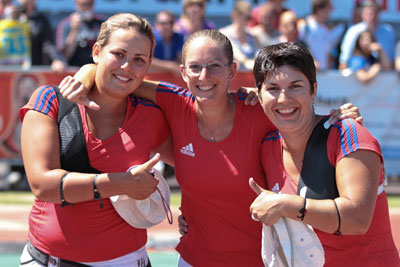 Lausanne – June 14, 2012: World Cup Stage 3: HRACHOV, Stage 3 of the World Cup will exceptionally be the last leg this year. World Archery has usually four qualifying stages to its World Cup Final, but this year as everybody knows there is another big event in the calendar: the Olympic Games. The fact that there are only three stages makes actually the life of the archers more difficult: all the three results count; there is no room for mistake. The athletes are fighting to be in the top 7 in the ranking (maximum two per countries) in order to qualify for the World Cup Final to Tokyo. One wild-card per category for Japanese athletes will complete the line-up. After the two legs in Shanghai and Antalya, let’s see who has already qualified to the World Cup Final and who is in good shape to get him/herself a ticket to Tokyo.

In recurve men, IM Dong Hyun (KOR) and Dmytro HRACHOV (UKR) have qualified for the World Cup Final with respectively 35 and 34 points in the World Cup ranking. According to the participation in Ogden, the following athletes can stay or move-up in the top 7: Brady ELLISON (USA), KIM Woojin (KOR), Markyan IVASHKO (UKR), Chu Sian CHENG (MAS), Juan I. RODRIGUEZ (ESP), Jeff HENCKELS (LUX), Gombodorj GAN ERDENE (MGL), Piotr NOVAK (POL) and Thomas FAUCHERON (FRA). To have any chance, all the others should reach the Ogden final and hope for the best…

In recurve women, Deepika KUMARI (IND) with 35 points, KI Bo Bae and CHOI Hyeonju (KOR), with 30 points each, can book their trip to Tokyo! In the mix for the last four places, FANG Yuting (CHN), XU Jing (CHN), LIN Chia-En (TPE), Miranda LEEK (USA) and Karina WINTER (GER) have an edge over the rest of the pack.

In compound men, with two victories and 50 points in the first two stages, Reo WILDE (USA) has brilliantly qualified! Currently 2nd in the ranking with 36 points, Dominique GENET (FRA) would be really unlucky not to qualify. With 34 points Braden GELLENTHIEN has an edge, but he is still under the threat of fellow American Dave COUSINS (USA) who has 18 points. The other favourites to qualify are Julio Ricardo FIERRO (MEX), Paul TITSCHER (GER), Pierre Julien DELOCHE (FRA), Reza ZAMANINEJAD (IRI), Peter ELZINGA (NED), Patrizio HOFER (SUI) and Mario CARDOSO (MEX). And let’s not forget Sergio PAGNI (ITA) and Martin DAMSBO (DEN)!

The best recurve mixed and compound mixed teams of the year will also go to Japan. In recurve, the race is wide open. In compound, the USA has a very strong lead over all the other teams.

Simply, there are the last three team Olympic spots (therefore awarding three individual places for the three team members) per gender up for grab in Ogden. All the countries that have not qualified a full team at the world championships in Turin last year can register to a specific tournament in Ogden (using the usual World Archery rules). It will take place on Thursday, 21 June, and as a recap only recurve archers can participate at the Olympic Games.

On the men’s side, it will be a true battle race for these three spots. Among the many favourites: Australia, Canada, Chinese Taipei, Germany, India, Japan, Mongolia, Netherlands, Spain, Poland, and Russia. A total of 32 men’s team will compete for the three places.

On the women’s side, there will be 28 teams competing in this tournament. A tough race is foreseen as well with the likes of Belarus, Colombia, France, Georgia, Germany, Japan, Mexico, Mongolia, Poland, Switzerland, Turkey and the USA!

The Final Individual Qualification Tournament will allocate the very last individual places and is open to all the countries that have not obtained a quota place per gender through the other qualification events.

If any of the countries that win a team quota in Ogden (see above) had already obtained any individual quota place, this place will be added to the list of available places at the Final Individual Qualification Tournament. Therefore, between four and eight places could be awarded per gender (maximum one per country in each gender).

There are at the moment 81 men and 53 women registered to this tournament that will take place on Friday, 22 June.